Mid-City Is Crushing Hard on Michael Gulotta and MoPho

Share All sharing options for: Mid-City Is Crushing Hard on Michael Gulotta and MoPho 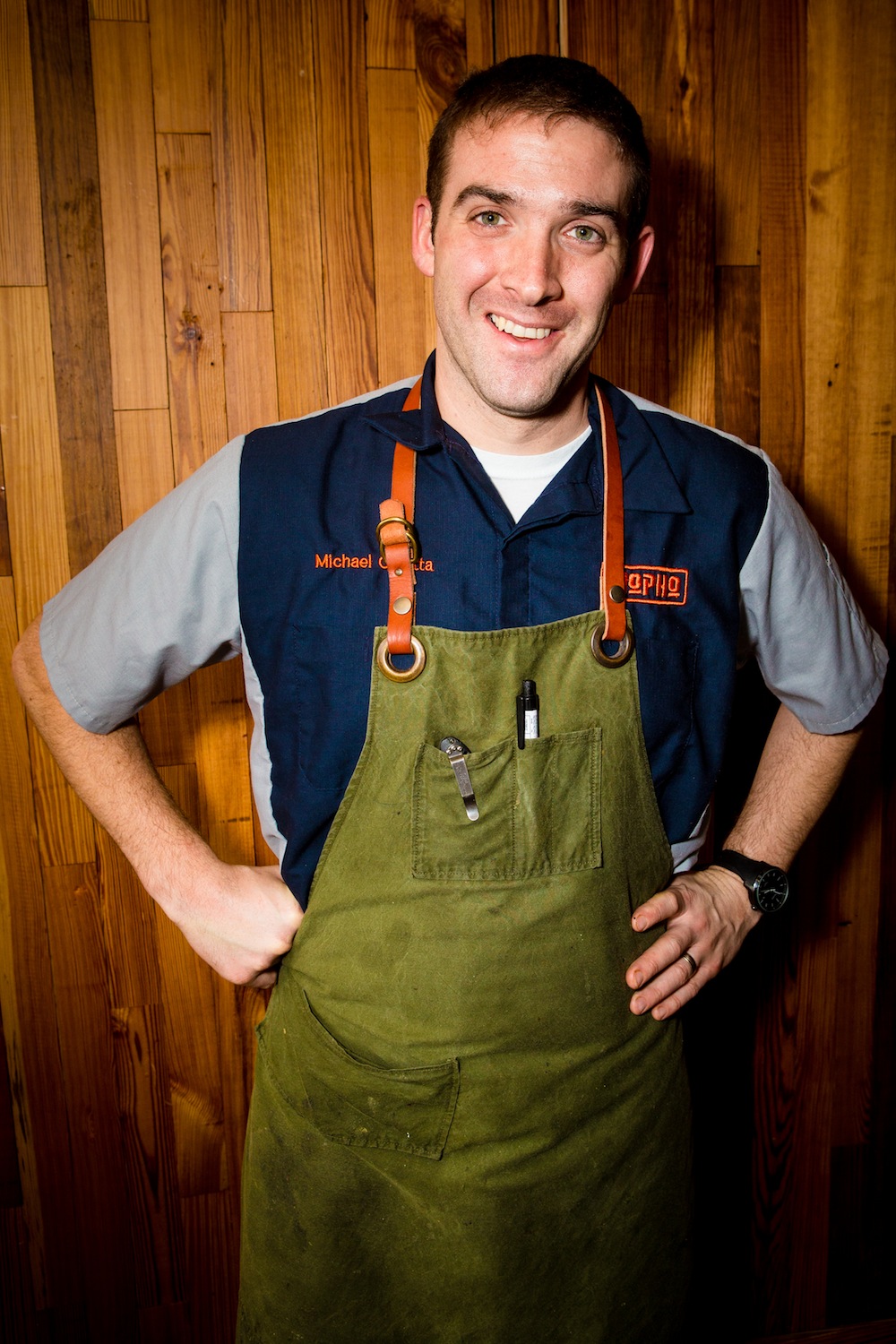 When MoPho opened a little over a week ago, it became the second brand-new Vietnamese joint in Mid-City, situated within NERF Vortex-throwing distance from Namese on Tulane and Carrollton. Though MoPho didn't quite beat its down-the-road counterpart off of the starting blocks, it was perhaps the more highly anticipated opening since it boasted August's former chef de cuisine, Michael Gulotta, as its ringmaster. Speaking to Eater during his restaurant's hectic first week in, Gulotta explained that he and his partnershis brother Jeff and Jeffrey Bybeedecided to open MoPho right off of City Park Avenue for two very good, practical reasons, the first being they felt that Mid-City, bustling though it may be these days, is still under served. The second reason is that, like all industrious New Orleanians, they wanted to have a great restaurant right around the corner from their regular bar, Mick's.

How's business been during your first week?

I can't complain about it. At Restaurant August we'd do, at the max, 200 covers a day, but right now we're doing closer to 420 covers a day. It's great, I obviously can't say anything bad about it, but we're only four days old at this point. We're still trying to hire up our staff and get more of everyonewe need more dish runners, more bartenders, more prep cooks, just more of everyone.

I have a great group right now working around the clock to make enough food to serve the guests.

Did you anticipate this kind of volume before you opened?

No, not at all. My two partners and I are literally slapping our hands to our foreheads every 20 minutes. It's great, thought, it's really exciting. The volume keeps the team pumped up and energized, and everyone wants to get in the door, which is awesome. We're just sort of reassessing our systems constantly, and trying to progress the menu and the kitchen and the service, and do all of that while we're dishing out 400 covers.

Have you noticed that there's a higher demand creeping onto the Eastbank for Vietnamese restaurants?

The funny thing is, it's all just about timing. We didn't realize other things were happening, and then other things started turning up after we'd hatched our plan. Even after we were getting this plan together, though, we still knew that none of the newer restaurants were going to come to Mid-City. We still felt that Mid-City was way, way under served as far as the kind of cuisine that we do. You only really have one or two other restaurants that are doing that kind of cuisine in the entire Mid-City corridor, which is a huge area.

We knew we still had an edge with location. Uptown and the Bywater had already taken off, but most people (at lest the people I know) who work in restaurants live in Mid-City, so it's a neighborhood with a lot of people who want great food but is still under served.

How did you settle on your location, right near Delgado and City Park?

Have you noticed yet if some things on the menu are more popular than others?

The biggest responses, as far as people being surprised at how much they liked it, have been for the lamb neck with pickled beets. Everyone loves the chicken wings, of course. They're just fun to share with a table. But the things that catch people off guard are the lamb neck and the pepper jelly braised clams. Those really surprise people. The fried oysters are a big hit, too.

Does what you have right now match your vision for what you wanted MoPho to be when you were still in the planning stages?

Well, I don't think we expected it to be quite so busy. For me, it's surprising because I've always done fine dining, and this is very different. I don't think I fully understood what my vision was; I'm learning on the fly.

How does this compare to fine dining, in terms of pace and workflow?

Even the dishes that we're churning out right now are still, I think, really thought out. You're just moving at a faster pace. Even at a restaurant like August, you're only doing 200 covers, but those covers may all be having seven courses, so, in a way, it kind of works out to the same thing, as far as the sheer number of plates flying out of the kitchen. The real difference is that here, at MoPho, the portions are so much bigger. The crazy amount of prep that we have to do is kind of bewildering. My sous-chefs and I are all from fine dining backgrounds, and we're just astounded with the amount of prep we have to do everyday.

What do you anticipate doing on your first Tuesday off?

We'll be fixing stuff around the kitcheninstall better heating elements for the pho, stuff like that. Our other really big problem was that the hot plates just weren't keeping up. The pho had to be much hotter. It needs to actually be boiling to be hot enough. We learned the hard way, and revamped the entire pho area, so now we have all these big induction burners making sure the pho is exactly at boiling temperature right when it goes out to the table. We definitely use Tuesdays to think about what went wrong the week before and how we can improve. We'll have all the staff in to do blind tasting and liquor tasting, and just generally catch up.

Where do you hope to be six months from now?

I hope we've gotten it down to system by then. Right now, we're on the edge of frantic, and you can never hold quality that way. I have to get my kitchen and staff trained well enough to where they're putting out plates all the time at a fast pace. I have a full staff, but they're only a week and a half old at this point, and they don't have the training to do everything consistently. We're one week in, and we've already served 1,200 people. We're kind of playing catch up, and we're all trying to help train each other.