It's Not the Apocalypse, It's NOLA's War on Go Cups!

Share All sharing options for: It's Not the Apocalypse, It's NOLA's War on Go Cups!

Over the past week Eater NOLA has posted a few articles? including Where Yat's and Vice's? pointing to the potential demise of go cups in New Orleans. The iconic I-can-leave-with-dis cup already appears to be on its way out in certain neighborhood bars and restaurants including Siberia, Booty's, Publiq House, upcoming Jimmy's Music Club and more. And lawyer/Hogs founder/Blackened Out blogger Rene Louapre has been tweeting nonstop about the epidemic, calling out the city's "gradual removal" of go cups "from new places and punishing existing with the proviso" of no go cup for you, a possible indication of things to come from your friendly neighborhood association and City Council.

Well, finally a mass outrage over go-cup freedoms has reached the social media universe ? Reddit, anyone?? thus inciting most New Orleans' publications to offer their opinions on the matter over the last 24 hours. Basically, Go Cup Hysteria has reached New Orleans, y'all. Whether you believe the hype or not, here's what the Times-Pic, Gambit, and more publications are saying about the potential War on Go Cups.

· The Times-Pic addresses the sweeping Go Cup Panic of 2013 with Todd A. Price asking if the go cup is really on its way out? The answer can be intuited as a YES, INDEED.

· Gambit immediately gives go-cup hysteria the old side eye, stating that "They" aren't trying to take away your go cups, but rather blaming the hype on a promotional-based cycloptic press-machine built to benefit the New Orleans Daiquiri Festival. The rather Crankypants-sounding Alex Woodward writes that none of the previous articles "pointed to any existing or planned ordinances to remove the city's open container laws, and there is nothing of that sort in the works." He also throws shade at a recent petition to keep go cups legal. The Gambit commenters thus tear him a new asshole.

· NoDef basically deems the go-cup panic an over-sensationalized mess, discounting the Times-Pics for joining 'the fracas' created by Where Yat and Vice, and trying to contact Councilwoman Kristin Gisleson Palmer for comment though "she couldn't be reached because was grabbing a drink to-go before heading home as a pedestrian passenger on the ferry." To which the commenters thus tear NoDef Staff a new asshole.

· These commenters include Vice-columnist Michael Patrick Welch, who had this to say to about his go-cup article via the NoDef comments:

Name three bars that before 2011 had closing times or no go-cup rules? Now there are a bunch, and there will soon be a bunch more. I didn't sensationalize anything, I went and did interviews and research with business owners, then fact-checked my piece with an expert in zoning/ordinances etc... Another thing, you are falling into the trap: no laws are being changed, so nothing is happening right? Laws would be easy to look up online, easy to understand, and easy to protest. You are buying the line that would inevitably lead to no one fighting back as this slowly happens. Sorry you ignored the story for the two years it's been quietly happening, but shitting on it now doesn't make my story any less true.

· The fracas-fiesta continues with another TP article, from Doug MacCash this time, reporting that, indeed, 'go cups are no longer a given' at bars and restaurants. A statement from Tyler Gamble of the mayor's office ensures that "The City is not pursuing a universal restriction on go-cups," but they're often restricted due to "Good Neighbor Agreements between ABOs and neighborhood organizations" and to "alleviate potential or existing problems for the neighborhoods, such as litter."

· Kiss Me I'm Cooking blog showed some love (and a mild case of xenophobia) for go-cup supporters all the way from Lafayette, where, erm, go cups are banned in their downtown.

· And then of course, there's this: 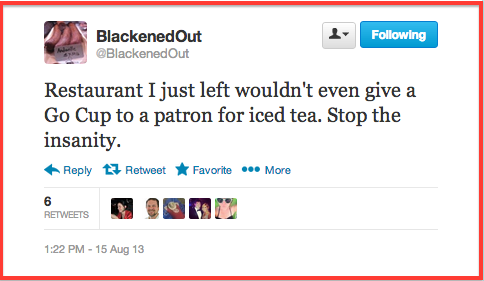 Know places that don't have go cups right now? Hate the imminent demise of the iconic New Orleans go cup? Leave a comment, and please, try to have a good weekend.