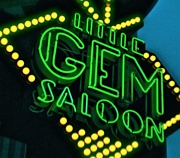 Earlier today, the Little Gem Saloon announced that it would be bolstering its kitchen offerings by naming Bayona and Rio Mar veteran Chef Miles Prescott as the music club's new Executive Chef. Prescott previously served as the executive chef at The Country Club back in 2007, and in 2009 was named a "New Chef to Watch" by Gambit. According to the press release, Prescott, along with Chef De Cuisine Justin Componation, will offer diners a "modern take on Southern-inspired cuisine." [Eaterwire]