Back to School With Cooking Channel's Freshman Class

Share All sharing options for: Back to School With Cooking Channel's Freshman Class

Here's a preview of Cooking Channel's brand new Louisiana based documentary style show The Freshman Class, from the producers of MTV's True Life. The show debuted last night and airs on Mondays, following four aspiring chefs/non-traditional students as they attend the Louisiana Culinary Institute in Baton Rouge. From the Press Release:

These students are chasing their dreams all the while taking a big risk - culinary school is expensive, difficult, and offers no guarantees. Follow the journey and get an insider's look into the trials and triumphs of being a culinary student.

Eater's Doug Barry was able to chat with cast member Ben Mitchell about his experience attending culinary school while being filmed for the show too. A little about Ben: He decided to go back to school at 41, even with three young daughters, a busy spouse, and a brand new plot of land sitting on the main drag in downtown Crowley. But Mitchell had dreams of opening his own restaurant, something, he says, that he could build up and pass on to his children. Add on a hard commute everyday to the Louisiana Culinary Institute in Baton Rouge, and trying to pass a test on food borne illnesses with a Cooking Channel camera staring him down, and you got yourself a television show.

Tell me a little bit about why you decided to go to cooking school and how you came to be on "The Freshman Class"?

My dad's from Cajun country, so I've been cooking since I was ten. It's part of life down here. I was fortunate enough to buy a piece of land in downtown Crowley about three or four years ago. I have the last empty lot on Main Street in downtown Crowley. My wife and I went back and forth for a while deciding on what we were gonna do with the lot, and we decided that we really wanted to build a restaurant, because there's really not much there as far as food goes. We figured it'd be a great opportunity to give the public a great atmosphere and a great meal. And, of course, they'd get to hang out with the Mitchells in downtown Crowley.

I don't know anything about running a restaurant, so once we made the decision to open a restaurant, I decided that the best thing I could do was get some education. I really, really want to be successful. I don't want to do anything half-assed?if I'm gonna do something, I'm gonna do my absolutely best. We looked at some culinary schools, and Louisiana Culinary Institute kept coming up over and over again. I talked to some people at the school about what my goals were, and how I was a little wary of running the business-side of a restaurant because I know so many new restaurants fail their first year. I don't want to be like that. I want to build something that's going to stay, something that I can leave to my children.

There was never gonna be a great time to go back to school at 41, especially since my wife works and travels a lot and we have three daughters. We made the decision to do it, but when I signed up at the Louisiana Culinary Institute, I had no idea that I'd be doing a show. It was the experience of a lifetime, and pretty much just a great opportunity. I enjoyed every minute of it. 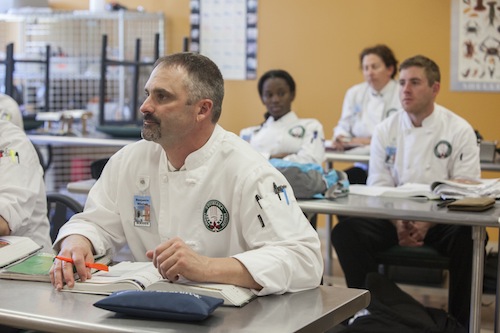 Did being on the show make school a little more difficult, or were you glad to get the exposure for your future restaurant?

The first couple weeks of filming were a little rough, but, regardless of whether you've got a camera in your face, you still have to pass the tests and make the grade. They don't cut you any slack because of who you are or what you're doing. They've got a real strict program, and the rules are the rules. For me to sit there in school after 20-some years with a camera in my face while I'm trying to take a test that I know I have to pass, it was tough. In the beginning, at least?after a little bit of time passed, I got used to it. Now, those people I did the show with are like family.

Did you develop some close friendships with your classmates over the course of the show?

Yeah, absolutely. There are friendships between us, without a doubt. Ultimately, we all had the same goal, which was to open up a restaurant. That being said and with us being in class all day together, there were definitely friendships that developed.

Were you surprised by how intense culinary school was, or were you prepared to hit the ground running?

I thought I was prepared [laughs]. No, I mean, I was as prepared as I probably could have been in terms of not knowing the unknown, but it was definitely and eye-opener when we first started school. I think one of the things that helped me is that I'm 41, I'm pretty disciplined, and I've got a lot riding on this. This is not just a television show?this is the future of my family. As far as priorities being straight, I think I had everything in line. Everyone thinks culinary school it's all cook, cook, cook, but it's really just books, books, books. Being out of school for so long and then going back and trying to develop new or better study habits than what I had before?it was tough.

It's not what I expected. I certainly didn't think it was gonna be easy, but it really is a lot harder than I thought it would be. It's a little bit like being in the military. Even now, you have to line up against the wall, and if your uniform is even slightly out of order, you're going home for the day. That's just the way it is.

What part of school have you found most challenging so far? What has been your favorite part?

Well, let me just say this: so far, everyday is a great experience because I'm learning. Of course you want to be in the kitchen more than the classroom, but everyday is a learning experience, and I love to learn. For me, there's no least favorite part, though I probably enjoy being in the kitchen more than anything else. Sitting in a classroom, though, is exciting because it's all new to me. Even the lesson about food borne illness was interesting because I know I have to learn it to be successful.

As a South Louisiana local, what are some of your favorite meals?

I love pretty much any kind of food on the planet, whether that's Cajun, Italian, Mexican?I love it all. I really enjoy cooking Cajun food, whether it's my seafood gumbo (which I've nicknamed my pot of gold), or crawfish etouffee, or fried shrimp, I really love it all. We eat a lot of deer at my house. I really enjoy food period, but I do love my Cajun food.

People ask me what kind of restaurant I'm gonna open up, and, to be honest, I'm not sure yet. I'd like to have a little bit of everything, but I think I'll get through school first before I decide what the menu will look like.

· The Freshman Class [The Cooking Channel]