Follow us on Twitter and Instagram at @nolaeats. We've been enjoying your pictures tagged #nolaeats. Keep the shots coming and we'll showcase the tastiest ones below.

There are some 1000+ photos tagged with #nolaeats on Instagram for NOLA.com to enjoy, thanks in part to Almeida, who has used the tag/encouraged others to do so for years, but legally there is no such thing as hashtag ownership. So it must have been a total shock when she discovered that one of her own photos was even being used by the Times-Picayune without permission.

What's even more horrifying is that Almieda believes NOLA.com is well aware that what they're doing might be considered seriously shady: 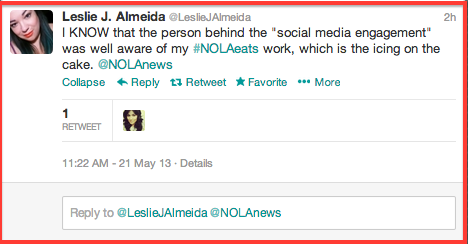 Almieda is the editor-in-chief of PROPAGANDA New Orleans (which publishes a whole section called NOLA Eats, based off a social dining group she founded a decade ago also called NOLA Eats) Unfortunately, Almieda never claimed the Instagram/Twitter username Nolaeats, and now NOLA.com has claimed it as their own. Strangely enough, NOLA.com has claimed @nolaeats and @nolanews on Twitter but not @nolabusiness @nolaliving @nolasports @noladrinks or @nolaweather. Almieda in return has created the Instagram account nola_eats, and is still encouraging people to hashtag with #nolaeats.

Whether Almieda can seek any legal action over what could be considered (or not considered) her intellectual property is questionable. Eater has reached out to Almieda for a comment, but not heard back at this time. Judging by her web presence, though, it's easy to see that she is pissed and rightly so: 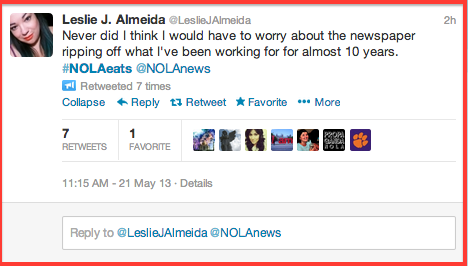 Apparently, at least one commenter on NOLA.com believes this whole ordeal is shameful:

· What's on your plate? Share your #NOLAEats [NOLA.com]
· All Shit People Steal [-ENOLA-]

Where to Eat, Drink, and Party in New Orleans for Halloween 2021

Amid Hiring Apocalypse, Raising Cane’s Is Sending Its Corporate Staff to Work the Fryers