Share All sharing options for: Bourdain and Andy Cohen Argue Over BP Money, While David Simon Takes Down Bravo's  'Bullshit'

Eater National reports that a vicious Twitter back-and-forth between Anthony Bourdain and Bravo VP Andy Cohen about funding television shoots in Lousiana?which got uglier than a junior high cafeteria brawl, mind you ? has finally been broken up by angry head lunch lady/Treme creator and exec producer David Simon, who offers a full answer to the Bravo "gentlemen's bullshit" in "three easy stomps," and sends Bourdain to the school nurse for a Barq's and nap time.

First, what had happened was... yesterday, Bourdain questioned Bravo's choice to accept a $375,000 payout from New Orleans and the state of Louisiana, $200,000 of which is coming from the BP oil spill recovery fund. Bourdain originally tweeted, "Maybe give the 200G back to Louisiana?" Would be a nice thing to do," even suggesting donations to Cafe Reconcile.

Cohen then attacked Bourdain, tweeting "Call me abt Treme's tax credits from NOLA." Bourdain, you may recall, wrote a number of restaurant scenes for HBO's Treme, many of which were set in New York City. Interestingly enough, he's also been an occasional judge on Top Chef. Bourdain tweets that "My point was not that taking $$ was "wrong" but that given circumstances and perception, a give-back would be a nice gesture," but obviously by then, he'd also sent emails informing his Treme posse of the escalating argument.

1.) Simon points out that Top Chef actively sought the funds to film in New Orleans, unlike the "standardized tax incentives" Treme received "without additional or outside negotiation."

2.) Simon notes that as a producer of Treme decisions about funding are above his head, unlike Cohen who is "the executive vice president of development for the Bravo network itself." He adds that "the decision to walk away from a standardized tax structure that Louisiana provides to all film production would be a decision above our pay grade."

3.) The fundraising efforts Treme made over four years of filming in New Orleans, raised more than $500,000 for New Orleans non-profits like The New Orleans Musicians Clinic and the Tipitina Foundation and three and a half million in music copyright payments.

Cohen seems to have conceded, as Nola Defender puts it, for the time being, tweeting a final "congratulations" at Bourdain. "We all love NOLA & want to bring as much business, tourism & attention to the city,chefs & gulf seafood," Cohen says.

Finally, in more jazzy Sharks vs. Jets action, Tom Collichio chides Bourdain for "retweeting hater I mean eater, c'mon never a good move." And Wendell Pierce weighs in, tweeting "WOW. That's New Orleans politics. Can't get sales tax structure (TIFF) to rebuild commerce in New Orleans East but gifting others." You can find a full listing of the tweets at Nola Defender. But we'll leave you with this NOLA lurvin' from Bourdain, as a final thought: 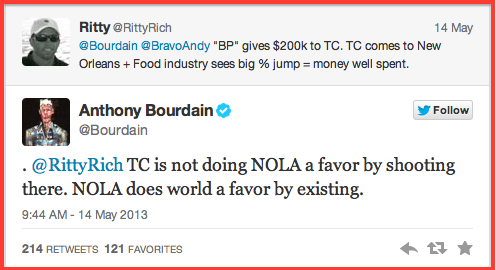