Say It Ain't So... Charlie's Seafood To Close For Good

Share All sharing options for: Say It Ain't So... Charlie's Seafood To Close For Good

Facebook friends of Charlie's Seafood, the longtime Harahan restaurant resurrected by James Beard Award winning chef Frank Brigtsen and known for shrimp calas and fried/boiled seafood galore, found an incredibly sad status update last night. The restaurant is shuttering by April 19th, but maybe even as early as next week. 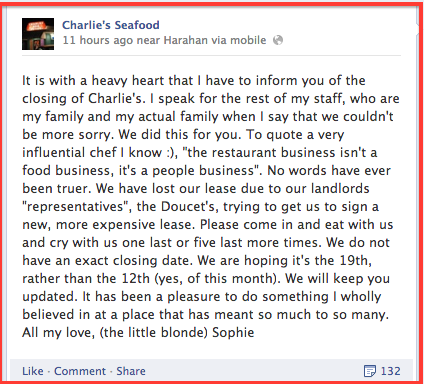 Susan Langenhennig reports that Frank Brigtsen? who took over the longtime neighborhood restaurant in 2009? has lost the lease. Brigtsen also took to Facebook, to announce the end of his four-year run:

For the last several months, our landlord has been trying to force us into signing a new, more expensive lease. The terms of the lease are totally unacceptable to us. The landlord has chosen to evict us.

Not much else is known at this time, but sounds like a trip down Jefferson Highway for a final berl is in order for this weekend.