Share All sharing options for: Eight Facts to Know About Newly Reopened Marti's

Todd A. Price dishes out the details on the quiet reopening of French Quarter icon Marti's this week. The legendary restaurant, which closed up shop in 1988? the space also housed popular Peristyle and shortlived Wolfe's after that? has been lovingly resurrected by the owner of Gautreau's, Patrick Singley, and is now open for business. Here are the main facts you need to know about Marti's before you go. 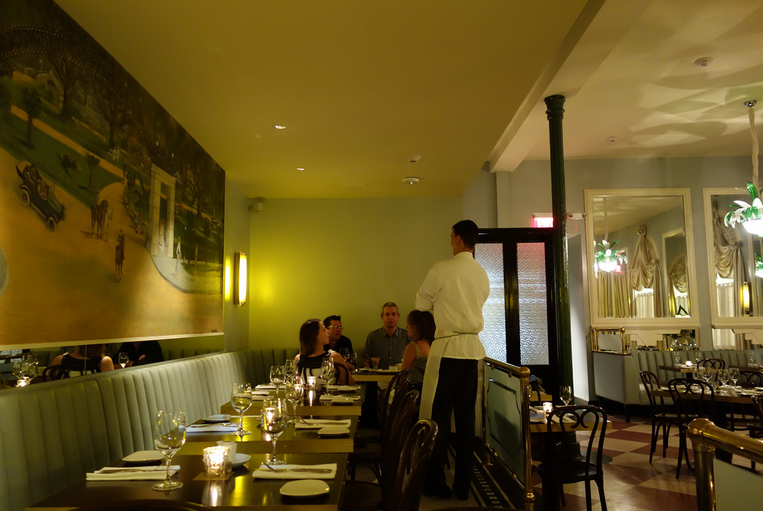 1.) Rebecca Singley's "able eye" is responsible for the restaurant's "period appropriate update," with modern design that's not "out-of-place"
2.) The entrance is actually on Dumaine, through the bar, and not on Rampart
3.) The bar is still home to the large, famous mural of City Park's Peristyle
4.) The bar's revamps include a "new Cognac and mocha wash on the walls" and "a pool of pale blue paint on the ceiling"
5.) Singley found Marti's chef Drew Lockett (a Louisiana native from the Honey Island Swamp) through word of mouth
6.) The Marti's menu is 'bolder' and more 'rustic' than Gautreau's menu, and will change seasonally, except for oysters/raw bar offerings
7.) Current menu items include 'heavy bistro fare' like roasted bone marrow and braised rabbit with focaccia dumplings and kidney gravy.
8.) Marti's is open late, until 12 a.m. to be exact. Currently they're open Wednesday-Saturday, but soon to be open seven days a week (likely within the coming week)