2012 was a break through year in terms of restaurant openings from Maurepas Foods to Restaurant R'evolution, but will 2013 be even bigger? If this is any proof, here are ten of Eater Nola's Most Anticipated Openings. From big names like Donald Link and Dickie Brennan, to innovative chefs like Phillip Lopez, Nathaniel Zimet, and Ian Schnoebelen, and even pop-up renegade Neil McClure, this year's openings promise everything from hunting season mixed grills to Asian street food, offering a wealth of diverse dining options throughout New Orleans. 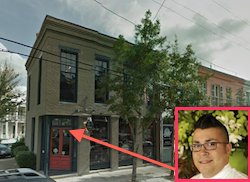 1.) Square Root
Location: 1800 Magazine Street
Hood: Lower Garden District
Projected Opening: Spring
The future in night. A tasting-menu-only restaurant courtesy of cutting edge Chef Phillip Lopez. Lopez is the man behind Root, which opened last year and is truly one of the most ambitious restaurants in the city. At Square Root, Lopez plans on serving ten or fifteen course tasting menus to a small group of guests. Lopez has even stated, "I want to give Michelin guide a reason to come to New Orleans and rate us." [Photo: Root] 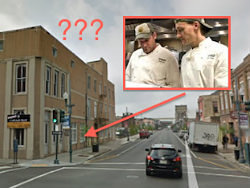 2.) Unnamed Donald Link Seafood Project
Location: corner of Julia and Magazine Street
Hood: Warehouse District
Projected Opening: Spring, By Jazzfest (at the earliest)
The Donald of Cajun Country is trading in boudin for fresh fish cooked over oak/pecan wood and an open fire, thus fulfilling his dream of opening a seafood restaurant. Ryan Prewitt, Link's pit master and Herbsaint virtuoso, will head up the kitchen. It will have a raw bar and is housed in a former funeral home where Jefferson Davis was enbalmed. [Photo: Google Maps/JimnNicks] 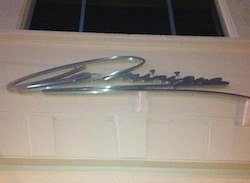 3.) Dominique's on Magazine
Location: 4213 Magazine
Hood: Uptown
Projected Opening: January
Dominique Macquet's long-delayed megarestaurant, which was set back due mainly to Hurricane Isaac, is a epic two level affarr, three times as big as the old location (now Apolline). The place boasts 190 seats, a 16-person chef's table, and a large wine cellar, all aimed for an art-deco feel. Outside, five aeroponic towers and a giant herb wall in the courtyard will supply some very local produce for Chef Dominique Macquet's menu. [Photo: Facebook] 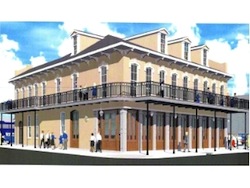 4.) Little Gem Saloon
Location: Poydras and S. Rampart
Hood: CBD
Projected Opening: January
The early haunt of Buddy Bolden and Jelly Roll Morton, Little Gem Saloon, is set to open as a restaurant/nightclub before January in the CBD after a $5 million dollar renovation of the historic building that's been vacant for decades. Executive Chef Robert Bruce, who's family ran beloved Maylie's (now Walk-Ons), has apparently gone back to study the Creole classics of yore for the 90-seater with a jazz club upstairs. [Photo: Loopnet] 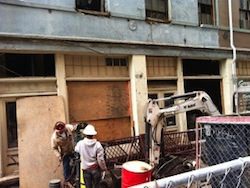 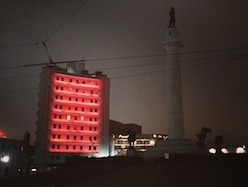 6.) Tivoli and Lee
Location: Hotel Modern
Hood: Warehouse District
Project Opening: Mardi Gras time
The former Tamarind space in the Hotel Modern, which is now a farm-to-table themed pop up Why Not, will become a full fledged restaurant again this spring when James Stuart, the creative director of the Hotel Modern, and Chef Mike Nirenberg (formerly of Oak, Patois ) open a full time farm-to-table bistro called Tivoli & Lee. Expect a hipstery nod to Lee Circle's past life as Tivoli Gardens in teh decor, with the help of Blake Haney of Dirty Coast and Flavor Paper wallpaper featuring NOLA celebs riding a carousel. [Photo: Facebook] 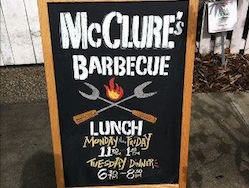 7.) McClure's Barbecue
Location:
Hood: Uptown
Projected Opening: March, maybe
Pop-up favorite McClure's Barbecue is moving into a permanent spot at Magazine and Bordeaux, across from Le Bon Temps. Owner/ Barbecue demigod Neil McClure tells his facebook fans that if you stop by the location during Mardi Gras, there just might be free samples. [Photo: Facebook] 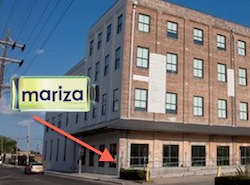 8.) Mariza
Location: 2900 Chartres
Hood: Bywater
Project Opening: January
Husband and wife team, Laurie Casebonne and Ian Schnoebelen of Iris, will open Mariza in the Bywater this winter/spring (Casebonne admits they're "beholden to construction"), featuring Italian-Inspired cuisine. Expect lots of house made pastas, salumis, and a raw bar. Located on the bottom floor of the hipstery, art-centric Rice Mill Lofts, and is expected to be casual with wooden tables and a large bar instead of the "white table cloths" at Iris. [Photo: Google Maps/Official Website] 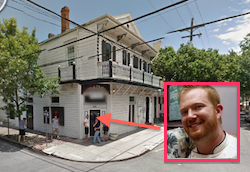 9.) Nathaniel Zimet's Unnamed Restaurant
Location:Dauphine and Frenchman
Hood: Marigny
Projected Opening: Unknown
Nathaniel Zimet, the Chopped-winning Boucherie chef who is basically kicking ass while recovering from being shot three times by an armed robber back in May of 2011, is planning to open a second restaurant next Fall in the former Santa Fe (and Desperado's) restaurant space on the corner of Dauphine and Frenchman in the Marigny. The yet unnamed restaurant will be two-stories, have about 70 seats downstairs and a giant bar upstairs. He plans for the cuisine to be but approachable, comfortable fine dining. The menu sounds very meat-tastic, including plans for a hunting season mixed grill. [Photo: Google maps/Boudin&Beer] 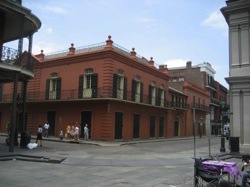 10.) Tableau
Location: 616 St. Peter
Hood: French Quarter
Projected Opening: January, with theater reopening around March
Dickie Brennan's group purchased about 60% of the historic La Petit's theater building near Jackson Square for $3 million in 2011, and the restaurant is gearing up to open in the next month with chef Ben Thibodeaux, who has been the chef de cuisine at the Palace Café for four years, heading up the kitchen. It sort of sounds like a major tourist and wedding den with 90 seats and the same French Creole menu for lunch and dinner, and private dining rooms on the second and third level. [Photo: La Petit Theater]