One Year In at the Soda Shop with Chef Todd Pulsinelli

Share All sharing options for: One Year In at the Soda Shop with Chef Todd Pulsinelli 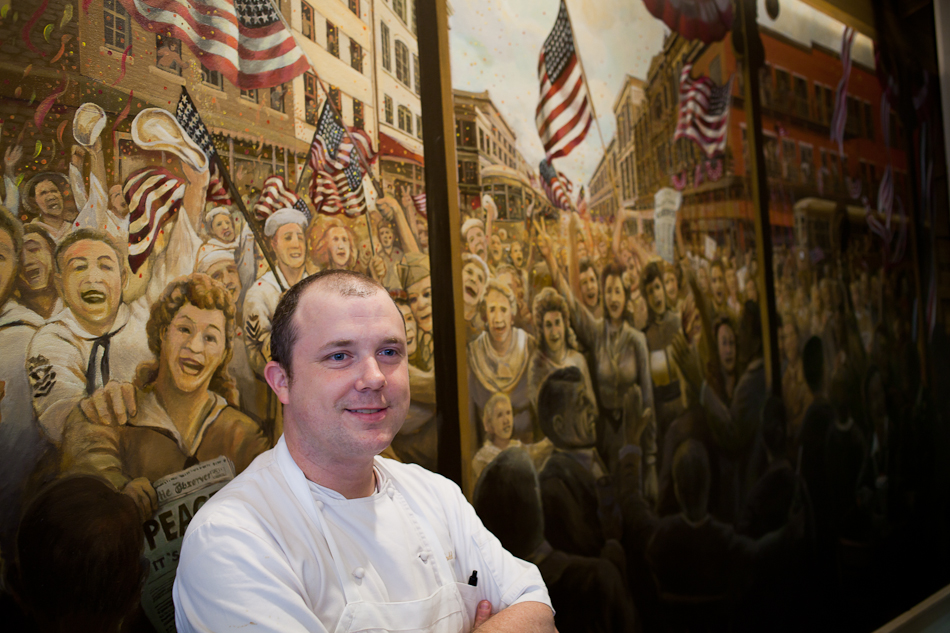 Hustling alongside Chef Todd Pulsinelli down the long corridor linking the American Sector with the National World War II Museum's expansive gift shop, it's hard not to feel like you're taking a stroll through the infamous tunnel system that snakes under Disney World, where characters quietly shatter childhood illusions by peeling off their fuzzy disguises and eating lunch. This is the behind-the-scenes stuff, where industrious staff members from the American Sector's huge kitchen bring supplies to their more modestly-sized neighbors over at the Soda Shop.

Pulsinelli, the executive chef at both the American Sector and the Soda Shop, makes this trek daily and admits that it can be a bit of a challenge ensuring that food and supplies are flowing back and forth between the museum's two John Besh operations. Still, after one year of whipping up frothy milkshakes and house-made sodas, Pulsinelli speaks about the Soda Shop with a gleam in his eye, eager for diners to finally recognize something he's know since last summer?the Soda Shop's breakfast biscuit almost certainly offers the best wake-up call in town.

How's business at one year in?

Business is great. It's pretty much non-stop. We haven't even really hit the summertime doldrums. We're very fortunate.

Does that have a lot to do with the steady stream of tourists that flock to the museum?

For sure. The museum is so nice and they [the museum staff] do such a great job. The Soda Shop is really part of that, a kind of extension of the museum.

Is the nostalgia factor pretty powerful at a place like this?

Yeah, for the house-made sodas and all of our ice creams. It's all homemade, and it's really good food, too.

What about locals in the neighborhood? Are you getting a decent following around the Warehouse District?

Yeah, there's a little bit of a following from the condos around the museum . I think there are more locals in the American Sector restaurant than in the Soda Shop just because it closes at 5:00, but we do really good lunch business. It's not just museum clientele?it's mixed.

Is being part of a larger organization hard to balance? Does it sometimes seem like you're at amusement park?

Not really since we do have daily specials like soups and sandwiches and stuff that we can get really creative with. We try to keep it in the realm of nostalgia-type food, but we go ahead of that by using a lot of local ingredients and creating more updated versions of classics. So it's fun.

Is it challenging to jump back and forth between the American Sector and the Soda Shop?

It is, but I have the right staff. My executive sous chef is really awesome. It takes a huge, burden off me, and allows me to focus on the restaurant while he's doing these big banquets and acting as a buffer between me and the museum. Working here, it's like having two bosses because there's John Besh and then there's the museum, and you kind of have to answer to both of them.

What in your previous experience prepared you to be the executive chef at a place like this?

I've worked for John Besh for 7 1/2 years, at August, Domenica, and also at Lüke. I helped open Domenica, then I was moved over here and have been the chef since it opened. As it's grown, I've grow with it. I'm originally from Ohio, in Columbus, and out there it was all country clubs and chain restaurants.

So in terms of the difference between there and here...

Were there similarities between how Domenica opened and how this place opened? Is there a 'Besh formula'?

Not with a place like this, that's part of the museum. It wasn't the same at all. This one had a four-day grand opening. We did food for about ten thousand people. Then the actual restaurant opened up, but they were opening a whole wing of the museum at the same time, so there was a lot of media and lot of celebrities like Tom Hanks, as well as some of the other people who did voice-overs in the movie that they show over here. It was pretty crazy, very different from anything over at Domenica, obviously.

Did you do anything special for this year's Fourth of July and the Soda Shop's one-year anniversary?

For National Ice Cream Day we did dollar scoops, and on the Fourth we just did barbecue specials in the restaurant.

What sort of experience do you look for when you're hiring for kitchen staff? I imagine going back and forth between the American Sector and the Soda Shop would require you to get some especially reliable people.

A little bit of experience, definitely. In the kitchen, I take a lot of interns and kids who are apprentices from Delgado. It's good to start them at a place like this because we make everything here, in-house, so they get a wide range of experience, from catering, to the restaurant, to the Soda Shop?we have such a wide range of food. There are so many different things. It really depends on what we're hiring for. I'll hire inexperienced to totally experienced if that person is the right fit.

What sort of events do you cater? Do you do strictly museum-related events?

It'll range from something like the Mayor having an event, to someone having a wedding, to an internal banquet with the museum staff trying to impress a donor or something. We've done tons of wedding receptions. We're doing Diamond Tours, which is something that happens about three times a week now.

Does anyone have WWII themed weddings or events here?

We've done some, nothing too crazy. They have war games here. A lot of guys show up in full regalia, which is a little nuts.

No, it's like out in the fields. I don't know exactly what they do...they have fake guns and old-school uniforms. I've never done it or really inquired about it, though they seem to have a lot of fun so I'm seriously thinking about inquiring.

What are you most proud of in the first year? Is there anything in particular you think you've really nailed here?

I think the fresh soda bases are really good. We use fresh juices and local produce, like berries and nectars, from local farmers. The peach and watermelon sodas that we do right now are just really, really good. We've been doing some bread production, like the focaccia bread that we use over at the Soda Shop, which is really good, and our house-cured meats have come a long way too. We're getting better at sausages and things like that because we make the sausage in-house. It's all just improved.

Moving forward, how do you implement changes in atmosphere that's more or less settled?

Really, we want to improve our ice cream flavors and get some more pies in the case. Better desserts, really. As this place expands, there'll be even more food outlets and more catering. We just kind of have to get better at what we're doing.

Is there anything you'd like to add? Things that people should look forward to?

Well, I'd really like to see more breakfast traffic because we do breakfast at the Soda Shop. We have this great item?it's a really big cat head-sized biscuit and you can add toppings to it for a dollar. It's awesome. It's the best breakfast in town, I think. Definitely the cheapest, and it does okay, but I'd like to see it improve because it's really awesome.

That's a shame because there are so few reliably inexpensive breakfast places...

Especially in this area. I mean, you get this big ol' biscuit and you can put SPAM on it or our house-made pork sausage. Fried chicken, too. It's stupid good. It just doesn't get much hype and I can't figure out why.