Share All sharing options for: The Sazerac Bar's Russ Bergeron Is Just an Old Fashioned Kind of Guy

All this week, Eater is talking to a number of the leading cocktail people in New Orleans to see where they like to go for a drink, for a feature we're calling Shift Drinks. 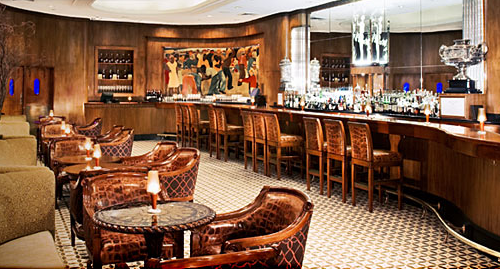 The nice man diligently mixing and serving you a cocktail behind the stately bar at The Sazerac has a name and it's Russ Bergeron. The head mixologist at the Roosevelt Hotel's famous watering hole likes his cocktails with a little fresh produce, preferring to concoct his potions with Luxardo Maraschino cherries or citruses. "We're really fortunate at The Roosevelt," says Bergeron, "because we have this huge 'walk-in' cooler full of fresh produce every day. It's fun coming in to work in the morning and see what has arrived in the cooler that day. Blood Oranges are another favorite of mine. I make syrup with them. Satsumas are great too when they're in season."

At the end of a hard day's mixing, Bergeron likes to frequent "the after-work staple" Cajun Mike's, but the cocktail pro is no stranger to fine wine: "I am a huge fan of Bouligny Tavern," he says. "I think John Harris has hit the right vibe with everything there. R'evolution's bar is great too, although part of me saying that is the 'wine-geek' who just goes there to drool over Molly [Wismeier]s wine list." Grabbing a beer at the 24/7 Avenue Pub isn't a bad bet either, especially since it features one of Bergeron's bar must-haves?good bartenders. "The most important thing for me is to get a drink in everyone’s hand. Do it absolutely perfectly, but also have that sense of urgency."

That's one way to judge a competent barkeep. The other way, of course, is to make him or her whip up something quintessential. "My all time favorite drink is the Old Fashioned," says Bergeron. "It is the quintessential drink of the South. It is also one of the most screwed up drinks by bartenders everywhere. It has always been my 'litmus test' for bartenders. If you can find someone who makes a mean one, you're in good hands."