Share All sharing options for: Vendors Convene from All Corners of New Orleans for the Food Truck Symposium

Tuesday evening, some of the city's best-known food trucks?Taceaux Loceaux, La Cocinita and Empanada Intifada, to name a few?idled in front of the Ashé Cultural Center in Central City for a symposium on the state of mobile vending in New Orleans. All manner of concerned citizens turned out to hear food truck advocates from out of town speak alongside locals like Neighborland's Alan Williams and President of the Food Truck Coalition (and owner of La Cocinita) Rachel Billow about the continuing effort to untangle mobile vendor permits from the snarls of New Orleans bureaucracy. The first 100 people on the scene got free vouchers for all the delicious eats parked right out front, because ain't no party like a food truck party 'cause a food truck party don't stop.

Here, without further ado, are the event's most important sound-bites: 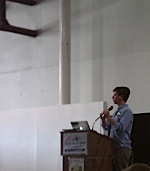 Alan Williams on multi-tasking: "A lot of these folks have two jobs right now. They cook for a living all day, but they also work to advocate on behalf of their entire industry, to convince the people in this room, first and foremost, and ultimately the decision makers in the city, that the rules and regulations that affect their industry are outdated, obsolete, and ultimately counter-productive."

Rachel Billow on doing your part: "Maybe you organize a bar crawl on a Friday night where you take your friends out and check out a few of the local food trucks. A lot of it [what you can do to help] is just increasing awareness of the food truck scene here in New Orleans and the ways it really complements our restaurants here that are so famous, and we hope that we really just add to our status as a foodie destination in this country."

Matt Geller from the SoCal Mobile Vendor's Association on advocacy: "Advocacy's a weird thing. Usually an organization is only as strong as its membership, but one of the most important things with this kind of advocacy is to engage the public. The thing that really helped us was the fact that restaurants have customers and food trucks have followers, and those followers are very very dedicated to getting out to that food truck to try that food. So when you tell them that they won't have access to delicious food at reasonable prices, they will come out and they will try to protect their own interests."

Christina Walsh from the Institute for Justice on opportunity: "New Orleans has an exciting opportunity to pass a clear, simple, legal, and modern law that embraces food trucks and entrepreneurship, which will only yield benefits for the local community."

Alan Williams on discrimination: "They [mobile vendors] face, ultimately, some pretty discriminatory rules in Orleans Parish. It's not anybody's fault. It's not the intent of any person or group of people to have these anti-competitive and onerous rules, it's just that they're old and outdated." 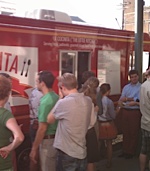 Matt Geller on gaining momentum: "At first cities brushed us [SoCal MVA] off, but now they're really starting to see the benefits of mobile vending. ... We've used food trucks to activate areas that were kind of run-down. We've used food trucks to raise money for churches and charities and schools, and people are starting to realize what kind of benefits mobile vending brings them."

Christina Walsh on the competition: "Laws that seek to protect one business from another are unconstitutional."

Matt Geller on the free market: "What really decides the success of a food truck, ultimately, is the market."

Alan Williams on New Orleans' biggest export: "Food is a huge part of our city's culture, it's a huge export. It's like our music?it's a living tradition, and these operators embody that tradition today."