Welcome back to Trucking It, a new feature in which Doug Barry takes a deeper look into the New Orleans food truck community and the obstacles they face. This time, it's a conversation with Rachel Billow of La Cocinita. 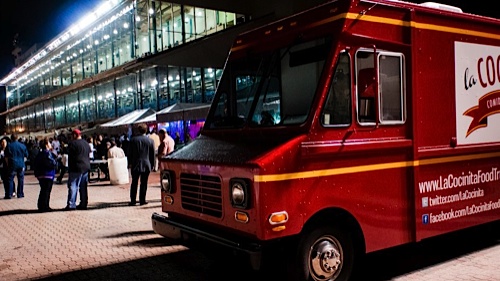 Back in May, the Times-Pic's Richard Thompson reported that a number of New Orleans food truck operators had banded together to create a nonprofit association under 501(c)(6) status, with the ultimate aim of petitioning the City Council "for an official interpretation of the laws" governing mobile vendors. In starting a dialogue with individual council members, high-profile truckers such as Rachel Billow of La Cocinita are hoping to slice through the city's Gordian Knot of permit regulations that often hamstrings mobile vendors.

Billow's name comes up often in conversations about food truck prospects in New Orleans, largely because she's been at the vanguard of the push for deregulation. She recognizes that, in order to streamline the licensing process for mobile vendors or convince skeptics that food trucks will only complement (not curtail) brick-and-mortar restaurants, food truckers need to work together to educate city officials and break decades' worth of regulatory inertia.

Indeed, inertia and misinformation seem to be the chief obstacles to a full-tilt, New Orleans food truck bonanza. Billow says that a strong food truck presence would only benefit a city struggling to stave off urban blight by increasing foot traffic in developing neighborhoods. More food trucks rumbling and parking around town means more people out on the street eating, and more people out on the street salivating for tacos means less crime. As for the argument that food trucks will siphon off business from New Orleans' community of established restaurants, Billow says that it simply isn't true. "Nobody," says Billow, "has a reservation at Emeril's, walks by a taco truck and is like, 'Oh, actually...'"

She explains that most New Orleans restauranteurs understand that they're not competing with food trucks for business. "If somebody wants to sit down at a restaurant, have service, shelter from the elements, and probably a sit-down meal with someone they enjoy being with, it's something totally different than eating at a food truck." Food trucks, she says, are largely targeting two types of customers: the office workers in the CBD who, with abbreviated lunch breaks, can really only look forward to a bag lunch or fast food, and the late-night crowd that emerges from a shuttering bar, hungry and with nary an open restaurant in sight. In other words, not the crowd nosing around the city for a leisurely meal.

"There are also plenty of restauranteurs," says Billow, "who have mentioned to me, 'I would love to have a food truck as an option [for] my restaurant, but there aren't enough permits available right now.'" Opening the licensing faucet up from its present trickle would, it seems, mean more business for everyone in the food industry. As for New Orleans trucking's grander ambitions, Billow intimates the possibility of future food truck roundups similar to the parks of largely stationary trucks and trailers in Austin and Portland where people can wander through a veritable pumpkin patch of quick eats.

Billow sees no reason why New Orleans couldn't have a robust food truck community that works in tandem with its rooted restaurants to satiate all manner of urban grazers. "My hope," she says, "is that we'll develop into a city that sort of has both [stationary and mobile trucks]. There will be places to go where you can have all different food truck options, and then late at night you can find them all over the city, so that wherever you are you won't be real far from a food truck."

Where to Pick Up Pies in New Orleans This Thanksgiving