St. Lawrence to Save the Lost Souls of the Quarter

Share All sharing options for: St. Lawrence to Save the Lost Souls of the Quarter

St. Lawrence is the patron saint of cooks in the Roman Catholic tradition. It's also the name of a new bar on N. Peters Street in the Quarter, at the former location of the Harbor. Don't worry, though?by all appearances the bar's owners aspire to be much less of a tourist trap than its predecessor in that space, and than their neighbor, Coyote Ugly.

Owned by Brendan Blouin and Jeff James, the ambitious menu is designed by Caleb Cook, an alum of Susan Spicer's kitchens at Bayona and Mondo who briefly worked at Cochon before joining St. Lawrence. The phrase "elevated bar food" is a little lame for what Cook is doing there, but that's probably the best description: the menu's peppered with items like burgers, spring rolls, wings, all done a little twist, plus daily specials and a number of crazier dishes like a turducken burger and a daily curry with veggies from the market. The bar's feel is generally dark and Catholic, with local artwork on the walls and just the right amount of religious imagery to fit the name. 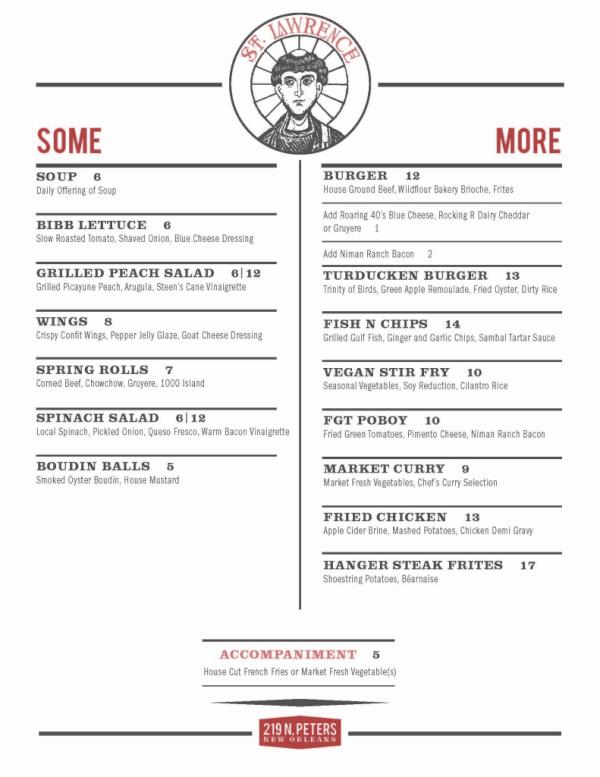