Craig Seaman on the Front of House at Dante's Kitchen

Share All sharing options for: Craig Seaman on the Front of House at Dante's Kitchen

Welcome to The Gatekeepers, a regular feature wherein Eater talks to the men and women who stand between you and those coveted tables. This month: Craig Seamen from Dante's Kitchen. 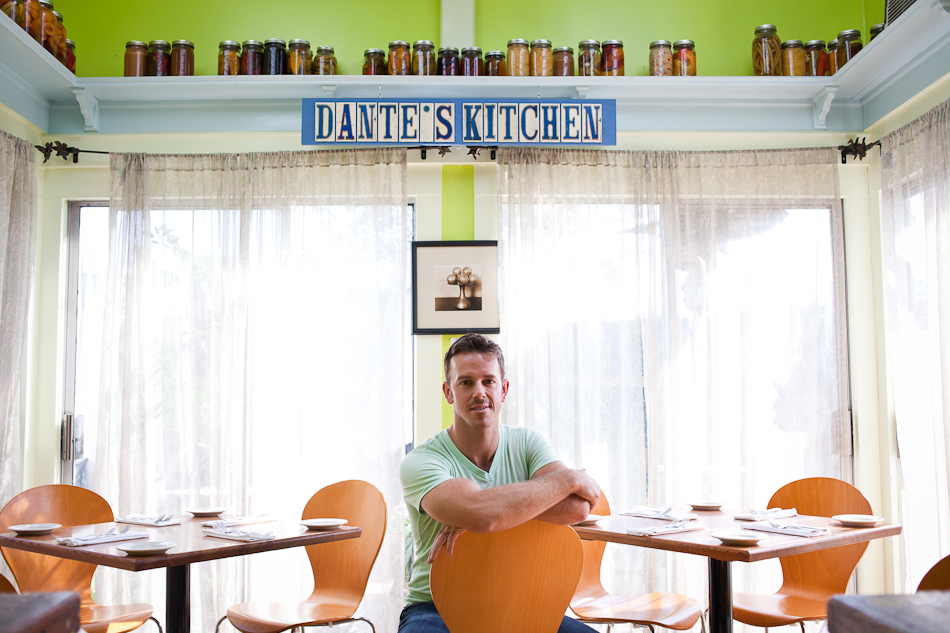 Tucked into a trapezoidal lot along River Road lies the secret garden of food delights that is Dante's Kitchen. It's easy to miss, shrouded as it is in palm fronds and huge, redolent shrubs that offer only the most tantalizing glimpses onto a spacious patio. Dante's was at the vanguard of the city's "locavore" movement (see also: Riverbend neighbor Matt and Naddie's) and remains an Uptown fixture, drawing from the bottomless wells of locals and Tulane kids that flock to its wooden gate when school's in session. Even as Dante's anticipates the more leisurely pace of the summer season, frontman Craig Seamen insists that the restaurant is always plotting new surprises for its patrons, which should be just fine so long as it keeps cooking its chicken under some handy kitchen masonry.

Do you notice similarities between Dante's Kitchen and some of the other Uptown "locavore" restaurants like Mat and Naddie's, Dick and Jenny's or Jacque-Imo's?

I think the feel is pretty similar. I think we do the same kind of thing where it's like, you've walked into somebody's house. You've been invited over and you're gonna have a nice dinner, enjoy some good company?nothing too stuffy. In the front of the house we try to keep that homey attitude, but at the same time we're trying to push the palate a little more and we have a good amount of background knowledge, which means that we have answers to pretty much any little thing a patron can ask.

As far as the the back of the house is concerned, I don't think they rest on their laurels. They're constantly trying to play with something new and come out with something different. For instance, our bestseller is chicken under a brick, but that's something they're just a little sick of making, and that we're a little sick of pushing in the front of the house. But at the same time, that dish keeps us alive because it keeps people coming back. We use the rest of the menu and the rest of our servers to try to sell the newer or more interesting items, and give people something a little more memorable.

Does the ever-changing menu present front-of-house challenges? Do regulars come in hankering for a particular item only to find out that it's been temporarily discotinued?

We definitely get some disappointed people when they come in looking for something that's maybe not in season or something we just made for four or five months before deciding that it's time to change it up. At the same time, from the front of the house, the dishes change a lot but the concepts are the same, so if returning customers looking for something they really liked the last time, our waiters can always say, "Okay, we're not making that dish, but here's something else that you've probably never tried before and it's approached in the same way, only with a new ingredient or preparation." That way, we don't let the customers get comfortable?we keep them trying new things, and I think they have more memorable experiences that way. That's what we're aiming for, at least.

Where are your customers coming from? Is it mostly an Uptown crowd or do you notice that people are coming in from all over the city, or ever beyond the city?

It depends on the time of year. I'm surprised at how many business convention people we get on the weekends. When there's a big convention, we get a lot, and then around Jazz Fest, it's tons of out-of-towners. Now, it being the beginning of the summer season, once the kids are out of school and at home, I think we get a lot more locals. It's a lot more consistent. Week to week, we see a lot of the same faces, which is kind of nice. I'm glad we're connecting and making a local crowd here, too.

Can you tell right away when a party of out-of-towners comes in?

They have a certain look to them, definitely. Sometimes they don't know where the front door is [laughs]. They tend to ask a lot of questions, I think because our place is part of a common theme in New Orleans, a bit like Matt and Naddie's, and because there aren't a lot of places that necessarily feel that way?kind of homey and approachable?the out-of-towners are initially seem a little off-balance.

So do you look for a waitstaff that helps cultivate that homey, dining-at-a-friend's feel?

Well, this is the behind the scenes aspect. A lot of the places I've worked, you get your job, things are divvied up and you come in at different times and set up different things. The process is sort of discrete in that way. We run the front as a big unit?everybody comes in together, everybody does their jobs together, and nothing really gets divvied up. We end up sharing a lot of it and I think we share the success in that too. Since we have such a different menu, we want people who are really excited about the food and drink; otherwise, they'll fall flat when customers ask questions. Other than that, we like people who are not afraid to work hard and work together. We have a great group.

How many people do you have on staff?

11 servers, two that bartend, and then there are five at back of the house.

You guys have such a playful cocktail menu. Do you consider Dante's more of a cocktail place or a wine place?

That's actually an interesting question. It's going through a bit of a change. When I started working here, I was working front of the house and I ended up taking over the bar program because I had an interest in that. I was told that I could do whatever I wanted and I was thrilled. I had never been given the keys to the door and I just had fun with it. Then another bartender started working with us and he had basically the same interest and passion, so for a while we were evolving the cocktail menu, just trying to make some different stuff, trying to make some stuff you never saw before, and then we both kind of got on a kick to change over the wine menu, which led to sort of a rebalance of power between wine and cocktails.

I think we just make people have a different experience and try something they've never had before, whether it's beer, wine, cocktails, sherry, anything. We've really diversified the wine list in the last six months. It's not a big wine list, so we try to keep it really interesting. Jazz Fest brings in a lot more of a wine crowd, and in the last few weeks people have been having a lot of cocktails. We try to use the ingredients the kitchen uses and make them a little different so they catch your eye and they're tasty and balanced. Of course, you're really going for balance in everything.

Are the crowds different in New Orleans from some other cities you've worked in?

I worked in New Jersey and I worked in Jacksonville for a while. I feel like the customers here, especially the ones coming to our place, have maybe done a little research or read a little bit about us on Yelp or something. They have more knowledge to start with, which is really encouraging for us because we're doing stuff that's a little more advanced?it's not just rum and Cokes, or not just rib eye and some fries. The composition of the menu is a little more advanced and I think that people for the most part pick up on that, which in turn means that our staff has to know more and they have to be versed as well. It's kind of like a rising tide raises all boats. I think it's a good thing, and people are expecting more, therefore we have to present more and know more, too. I think the local crowd and the specialty crowd we get in our place?making the trip from Downtown all the way Uptown to come to Dante's?they have knowledge and they're expecting something, so we have to deliver.

Any major changes on the horizon?

Right now it's summertime, so it's a nice time for us to take a little breather. I would says it's probably our slowest time of year, so we have the time to experiment with fun new liqueurs, new infusions, or some mod drink, so it's a time for us to play as we try to prep for the rest of the year.