For Pizza Week, Eater NOLA spoke with a number of food and drink people across New Orleans for a Best Thing I Ever Ate style series. These posts will be sprinkled throughout other Pizza Week coverage. The series starts today with Michael Doyle, chef/owner at Maurepas Foods. 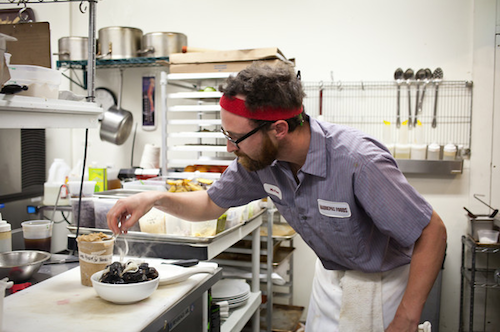 "I love Pizza Delicious, and I love those guys," says Michael Doyle, chef/owner at Maurepas Foods. His restaurant is located on Burgundy in the Bywater, around the corner from the kitchen from which Michael Friedman and Greg Augarten run their pop up pizza joint. On top of keeping his love in the neighborhood, a specific event really cemented Doyle's love for Pizza Delicious:

It was the first Thursday we were open. We were bumping, had no idea how busy we would be. ... Mike Friedman walked in with like four pizzas and a thing of garlic knots and said, "I figured you guys could use some pizza." It sat there and we all just kind of stared at it. Three minutes later it was decimated.

And what's Doyle's favorite pie at Pizza Delicious? He's got a thing for pickles, so he's a big fan of their pizza with peppadews, which appears sometimes as a special.