In this edition of Trucking It, contributor Doug Barry rides along with Gia DiLeo of Green to Go, one of New Orleans' more distinctive mobile food vendors. 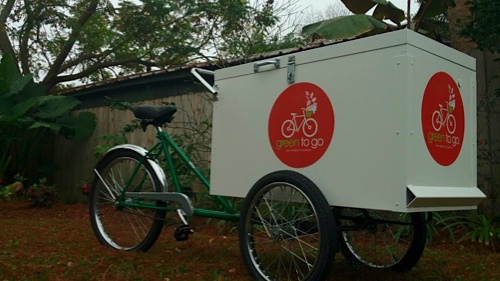 These days in New Orleans, it's becoming easier to observe the great law of food truck physics: a food truck at rest stays at rest, and a food truck in motion stays in motion, especially if that food truck is actually a food bike dodging afternoon traffic along the bustling stretch of Magazine Street between Jefferson and Nashville. "Ever see that episode of 'Seinfeld' where George has to cross the street with the Frogger machine?" asks Gia DiLeo, co-owner, operator and peddler of Green To Go. I nod, of course, because every sensible person has seen every "Seinfeld" episode. "This is a lot like that." She pushes off, gliding gracefully through the small window of traffic just before it slams shut, leaving me, clumsy and timorous, on the wrong side of the road hoping for a polite opportunity to catch up with her.

DiLeo is a former attorney who came to New Orleans by way of California and Chicago to start a salad-peddling business with her sister Stephanie. Green To Go, a large custom tricycle with a toy chest full of salads and a credit card swiping iPhone, is the result of the DiLeo sisters' limbo brainstorming?how low, or in this case, minimal, could they go while still offering healthy alternatives to the rich, fried fare New Orleanians love so much? "I looked into buying a location on Freret," says DiLeo, parking her bike in front of a Magazine boutique, "and it was going to be something like a $300,000 investment." She smiles and adds laconically, "And, you know, this isn't a city known for healthy food."

When she decided to start her new business, DiLeo says she looked into the cost efficiency of setting up shop in a brick-and-mortar space and found a disheartening statistic that rent, mortgage and utilities typically devoured some 80 percent of small business profits. With her goal to bring fresh, organic food to her customers at reasonable prices, a static business just didn't make much sense.

Neither did a full-sized food truck, the likes of which would have run the DiLeo sisters upwards of $150,000 and been all but impossible to parallel park along Magazine. Inspired by bike-friendly cities like Portland and Austin?cities, coincidentally, with robust mobile food communities?DiLeo settled on a bike, which allows her to navigate temperamental Uptown traffic patterns and deliver fresh, seasonal salads to shop-minders who are often stranded behind their registers, unable to do more than gaze longingly through the storefront and salivate. On our little jaunt up and down Magazine, DiLeo stopped at nearly every store, each time greeted by grateful customers hungry for something other than take-out.

The drastically low overhead necessary to run a business like Green To Go is the most efficient and eco-friendly iteration of food trucking, and offers a glimpse of the many creative twists small business owners can add to mobile food vending if only the city eased some of its more baroque regulations. DiLeo co-exists with Magazine Street restaurants, mostly because her bike is noiseless and inconspicuous, but also because she's carved out a new niche in a city not necessarily known for its organic salads. Still, she echoes many other mobile food vendors when admitting that getting started was a bit of hassle. "Definitely licensing and permitting can be a big issue," she says of the city's oft-noted inertia when granting new mobile vending permits. "I wish the city was a little more user-friendly for new business?even the website isn't too helpful and I was a trial attorney in Chicago for almost ten years ... so I'm fairly business savvy and even I had a fairly hard time figuring it out."

Even with the challenges of getting her salad-on-wheels business rolling, DiLeo's done well, garnering a loyal clientele that eagerly awaits her noon delivery rounds. She's even broadening some palates in the process. "I can't tell you," she says in between handing out Ponchatoula strawberry salads, "how many people I've met that had never eaten a beet before. I'd say, 'Just try it, no charge,' and they try it and say, 'My God, that's amazing!' If you can open somebody's eyes up to something new, it's worthwhile." She, along with the rest of the city's burgeoning mobile food community, is in the process of introducing New Orleans to a new way to eat well, and is hoping the city council opens its pursed lips and tries something a little different.