Share All sharing options for: René Bajeux on Passion & Excitement at René Bistrot

This is Two Weeks In, a new feature where Eater talks to the chefs and owners of new restaurants about opening up and getting off the ground. 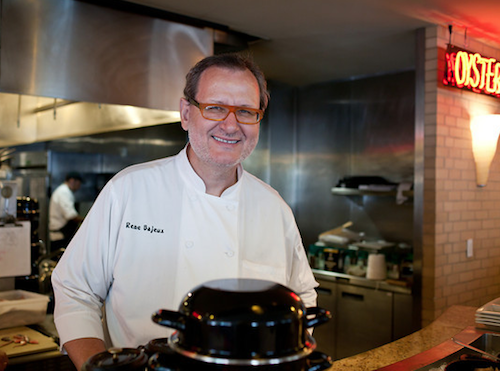 René Bistrot, the restaurant by celebrated French Master Chef René Bajeux, was beloved before the storm and the federal floods but never reopened after. In the years since, Bajeux worked briefly at John Besh's La Provence on the North Shore, also cooking in San Antonio and the Caribbean. He returned to New Orleans last year to run the kitchen at the Rib Room in the French Quarter, before leaving that position to reopen his namesake French bistro in the space that previously housed LaCôte Brasserie, in the Renaissance Arts Hotel. It softly opened two weeks ago on May 15.

In this interview edited for clarity and for length, Bajeux talks to Eater about opening the restaurant, how this one's different from the original, and the path he's taken since the first René Bistrot closed.

So you've been open two weeks. How's it been going?

Yeah, we've been open two weeks. It's been great. What we're really excited about is that the restaurant is changing. We're not changing the walls right now, we're not changing the carpet right now?we're just making some small touches. More than anything else, everything is homemade. Everything. It's starting to sound like a cliché now, "farm to table," but we participate in a lot of that. That's exciting. And the staff is right on track.

So it's the same staff and basically the same look as LaCôte?

Yes, everybody thought I was going to come in and fire everybody, but these are some young, excited kids. They're excited to be here and they just were waiting for the spark. When you, as a cook or as a waiter, when you have an empty dining room, there's nothing more disappointing. Right now we've done zero advertising?we wanted to do a soft opening because we had only one day to switch over. So we're giving it some weeks, some months.

It was funny to watch, because on Monday it was LaCôte and on Tuesday it was René Bistrot.

We're even still waiting on the awnings! The awnings are coming now, any day.

Have you had any of your regulars from the old René Bistrot come in since you've been open here?

Yes, yes, yes. And that's very heartwarming because the kitchen at [the original] René Bistrot was open. Well this one is double open. And I'm here every day cooking. And really, what I like here is that I designed this kitchen 12 years ago, so I know every inch of it in the back of the house. That's a good thing and a bad thing sometimes, because it's open, so they can see in. But you have to watch your mouth and you have to watch your hands. It's not like cooking in the back. You have to be clean, you have to be organized. So it's good. Saturday night was the best night I've had in a long time.

This past Saturday night?

Oh yeah. We were just busy, busy, busy. Everybody jumped. Friday night it was not such a good night. Some of the cooks were kind of slow. But, you know, it was very slow here for a long time. Friday night, we emptied the line. I pulled all of the cooks off of the line, and I said, "If you guys cannot do it, you're going to watch." And then Saturday we did double the covers and zero problems. But it's a great feeling. I'm more excited now than ever. The front of the house is reacting very well. Some of the regular customers are coming back.

How is this one different from the original René Bistrot?

If you look at the menu here, it is not like at the [original] René. Because I didn't want to do that again. More than at René, I make all the stuff here. Like a homemade blood sausage, I thought, "Oh, I don't know if we'll sell it." We opened two weeks ago and we've sold 75 orders of it already. When I made it I thought we would maybe sell four or five orders, but people like it. But I think 12 years ago, 15 years ago, no, it would not sell. That's because we now have so many different types of restaurants. Mexican, Argentinian, whatever. So I think people are getting exposed to it.

So you think the dining scene is different now than when you opened the first René Bistrot?

Better. I think the food is better. It's better in the city than it's ever been. The old restaurants even are better, like Commander's, I can have an incredible meal there. Everybody's on top. I think it's better than before. A lot of young chefs are here, like [Phillip Lopez] at Root, with different styles, not just one style. Not everybody has crab cake and gumbo.

So at what point did you start thinking or talking about reopening René Bistrot?

About two months before I left [the Rib Room]. I was with the Omni, beautiful people. I'm not playing it up, they are great people. I didn't leave because what people said, like, "Oh, they're strangling René!" Zero of that. Not at all.

There were whispers of that while you were there, and then again when you were leaving for here.

No, no, but that's the thing. People say, "Oh, René left because they were strangling him." No, not at all! The group here approached me, the local investors, and asked me if I wanted to do it again. They knew I designed this place 12 years ago. They asked if I wanted to do it and I said, "Well, let me think about it." Because I was fine over there. I could've done it for the next 10, 15 years and been fine. But sometimes, this sounded better. I'm going to be 55 in August and I still have the passion. I'm more excited about what I do for a living than ever.

It seems like being back in New Orleans, for one, would be nice. But especially being back at the restaurant that has your name on it would be relieving, to say the least.

Sure. And we have a great GM, local investors. They leave me alone, they know that we will make money. I think that I'm smart with business, and also smart with customers. I'm very hard in the kitchen, I'm not as soft as I sound, but I'm also very focused. I love the excitement. For me, when you're on the line and it's crazy, and the shit hits the fan, I love it. That's when I thrive. More, more, more, give me more.

After Katrina, you spent a lot of time all over the place. Talk to me a bit about that experience.

Some people think that I've changed jobs every year for the last four years. No! I was concerting [my efforts], because my wife and my kids were always here. My house was always here, my family was always here. One year they were in Wisconsin because it was no good here, and they'd come back to fix the house and all that. But some people thought I was dead, or I was divorced. My daughter was younger at the time and somebody asked her, "Where's your dad?" And she said Angola, like the prison. What can you do? I was in Anguilla, not Angola! And this is a good thing and a bad thing: I could have stayed in any one of those jobs I had during that time.

But you wanted to get back here?

Yes, it was always back here. I did my contract [at the other restaurants] and they'd ask if I want to come back, and I'd say no and I'd move on. It was a beautiful experience. Worked like a dog, though.

How much does that influence the concept you're doing at the new René Bistrot?

What I bring is the excitement to cook again. I rediscovered how to cook again. I had a great time at La Provence, one of the best jobs I've ever had was there. Raising the pigs, with the farm, and all that, the real farm-to-table stuff and changing the menu every day?through all of my career the best job I've ever had was probably that. After this job, of course. You see what I'm saying?

Absolutely. So what sorts of changes can we expect here? I know you mentioned the awnings and the small details. Anything major?

Just a couple of changes, some little details. The carpet's going to go. It looks like somebody was doing acid in 1970, or a bad Van Gogh. That'll leave this summer. To me those are little details. We just didn't have a big enough window of time. And then we're going to put up a partition between the bar and the restaurant. Much more plants and green, too, to relax the place a bit. A lot of little stuff.

I'm just excited about it, because it's not just about René opening, for me, it's about providing jobs. Certainly for me, providing for my family, but also for my staff, and making the investors money. So far, the response has been great. I think when you add your sensitivity to the menu, truth to the menu?well for me, the biggest thing is doing everything homemade. It's just simple things, it doesn't have to be complicated.