Share All sharing options for: Food Trucks Hope to Gain Traction This Summer

This is the first installment of the Trucking It, Eater NOLA's regular look at what's going on in the region's mobile food community. For this first post, contributor Doug Barry gives a deeper look at the New Orleans Food Truck Coalition and their plans for the summer. 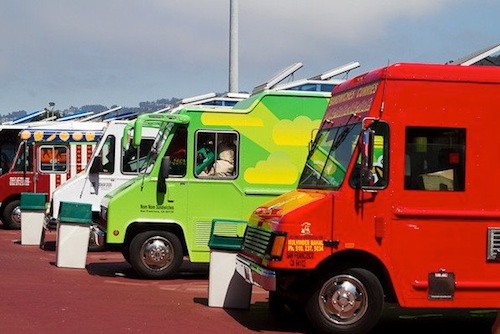 Earlier this year, the Times-Pic highlighted the ongoing struggle between food truck vendors and the New Orleans City Council over the apparent shortage of food truck permits, focusing on the frustrations of vendors who not only have to run their businesses, but also navigate the city's labyrinthine regulations governing food truck operation. In an effort to cut through some of the city's licensing red tape, vendors banded together in March to form the New Orleans Food Truck Coalition, complete with a nifty Tumblr and everything.

They also enlisted the consulting prowess of Neighborland, an organization that helps neighborhoods articulate and implement community projects, often starting with the credulous-seeming phrase, "I want" (for example, one such proposal reads, "I want to see a single screen movie theater in Mid-City").

Neighborland's community director Alan Williams says that the Coalition is hoping to put into practice some of the ideas its supporters have been kicking around in the ether, which is why Neighborland helped convene 15 especially creative New Orleanians as part of a two-month campaign sponsored by GOOD media to improve the city's foodways. These people, Williams explains, have been "challenged with creating a project or a product that can help the food industry in New Orleans grow. They may produce anything from a print guide to a web design to an event or pop-up installation."

Williams hopes that such a project will help get the Coalition's three-pronged plan?to reform current food truck legislation, increase public awareness about the plight of the city's food vendors and educate New Orleanians about the sundry benefits of food trucks?rolling. "So," adds Williams, speaking of the attention that the GOOD project will draw to the Coalition's efforts at reform, "we've got the community organizing track, the design track and the new media track."

He insists that the food trucks are a win-win proposition for the entire city, and that friction between food truck vendors and brick-and-mortar restauranteurs who admire their mobile competitors' sweet rims has been exaggerated. Just take a gander at the NOFTC video, which offers an exhaustive litany of reasons why food on wheels is pretty much the best thing that could ever happen to a city that loves food as much as this one does. Here's hoping the NOFTC garners enough support to make a really next-level follow-up video with food truck transformers that force the City Council to grant them permits.