Share All sharing options for: The Early Reactions to Michael Doyle's Maurepas Foods

Welcome to Good News/Bad News, a feature where Eater looks at the reaction, both good and bad, to recent openings. 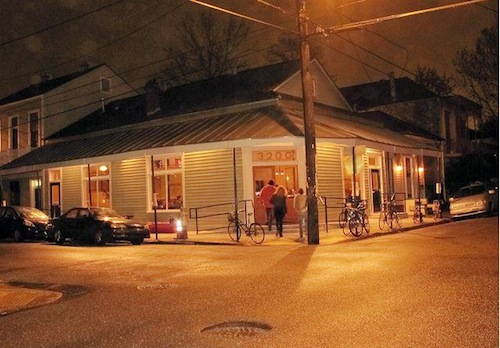 Since chef Michael Doyle opened the restaurant a little over two months ago, Maurepas Foods has established itself as one of the hottest operations in town. Featuring a serious farm-to-table approach and a constantly changing menu based on whatever's freshest at the moment?all collected together in a novel menu layout that divides starches from meats from veggies, rather than by courses?the restaurant Doyle's restaurant reflects his professional roots at Dante's Kitchen without actually being fine dining at all. Let's take a deeper look into what people are saying about it.

The Robust News: The one remark many people, perhaps even too many people, make about Maurepas Foods is that the food there is "robust." That always comes up because the restaurant's tagline is "Purveyors of Robust Cuisine." New Orleans Mag's Robert Peyton is one of those who suggest that robust "is apt for chef Michael Doyle's cooking." The term both describes the cuisine, a sort of Southern-influenced New American, and Doyle's overall approach to the restaurant. [MNO]

The Boozy News: But wait! The cocktails are just as robust as the food. Times-Pic booze guy Todd Price compares the drinks to the food, writing, "The equally bold cocktails use ingredients and spices more often seen on a plate than in a glass." [TP]

The Neighborhoody News: The magazine Country Roads writes that Maurepas Foods "is quickly earning a place on diners' radar," before shifting into a more community-oriented analysis, say that the restaurant "is an excellent example of the restaurant-as-centerpiece for the Bywater community." [Country Roads]

The "Infinite Stardom" News: The commandant of the local Yelp philosophizes on Yelping, writing, "Sometimes, when all is right in a restaurant, you need to grant it 'infinite stardom' and perhaps even yelp about your subsequent visits." She follows that up with praise for the cocktails, including the Chameleon, and a number of dishes, including the brussels sprouts and the orechiette. [Yelp]

The *Loud* News: Another Yelper was equally impressed with the food and the decor, but couldn't handle the noise: "I think I can still hear some of the hammering from when they first renovated the place echoing around. Maurepas Foods is *loud*. Damn loud. Freaking loud. Curse words loud." [Yelp]

The "Worth the Wait" News: The Yelp also feature a number of people mentioning the typically long waits, though the reaction to that tends to be that the place is worth it. (And one last piece of Yelp news: the only 1 star rating on the site was from someone making the really-difficult-to-substantiate claim of food poisoning. So there's that.) [Yelp]

The Chic News: On the NewOrleans.com message boards, that site's editor Colleen Rush has this to say: "It's a chic space, kindof what it felt like to run across Wylie Dufrene's wd-50 on the Lower East Side in NYC...little jewel box in the rough." Later in the thread she writes that she didn't love everything: "The cauliflower caponata was my least favorite" of the meal. [NOdotcom]

The Not Too Exciting News: There are only two comments on the NOLA.com article about the opening, one of which is calls Maurepas Foods "a must try," the other of which is much less excited: "Eh...not too exciting. Food was OK. It was either bad or it just didn't sit well with my stomach." [NOLA.com]