In a Small Place, Rue 127's Ray Gruezke Does It All

Share All sharing options for: In a Small Place, Rue 127's Ray Gruezke Does It All

Welcome to The Gatekeepers, a regular feature wherein Eater talks to the men and women who stand between you and those coveted tables. This month: Ray Gruezke from Rue 127. 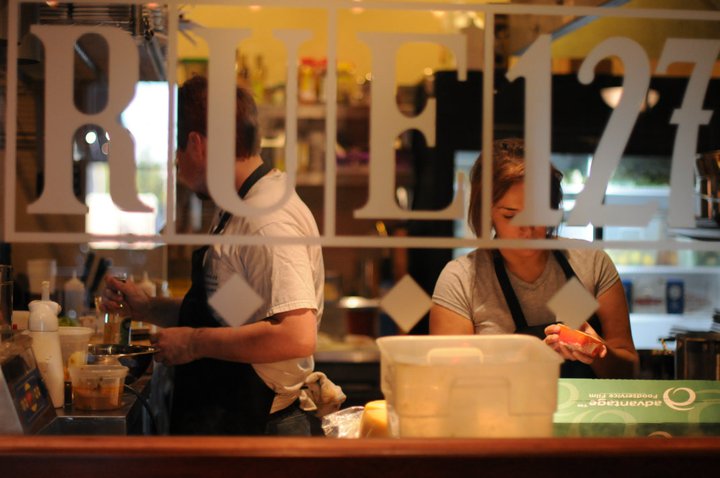 Tucked snugly between the Italian Pie and Juicy Lucy’s, the renovated teal shotgun housing Rue 127 seems like a colorful sprinkle caught in the teeth of the 100 block of Carrollton’s Mid City bars and restaurants. Yet even with so many neighborhood fixtures at the ready, residents have embraced the little bistro ever since chef/owner/amateur electrician Ray Gruezke opened it in the fall of 2010, and seem happy to let Rue put down roots of its own.

After attending the Culinary Institute of America in New York, Gruezke, a New Orleans native, returned to his home turf for stints in the kitchens of Le Foret and Commander’s Palace. With his aunt’s help, he turned a 19th century shotgun house into an intimate neighborhood restaurant that offers locally-sourced produce, an in-house pastry chef (Joanna Palmer), and a killer Old Fashioned. All this in a cottage-close dining room where the waitstaff is given only one real directive  make friends with the patrons.

What are the biggest differences between the logistics of a place like Commander's and a restaurant as small as yours?

It's night and day, everyone wears many hats. I do the kitchen stuff, then I do some books, then I take care of some guests. You're not just a line cook, you're not just a chef, you're not just front-of-house  you're kind of a little bit of everything. I mean, my pastry chef is doing some of the paperwork. That is one of the biggest things, just that a lot of people coming from a place like [Commander's] have got such specified, such refined roles. You'd do 600 people for dinner there and be busy, busy, busy, and you come here and you're busy but you're only doing like 75 people, so the scale is really different. Everything's compressed, and then there's the space issue. I mean, I've got one of the nicest kitchens I've ever worked in here, but at [Commander's] you have storage space. I think their whole kitchen was probably the same size as my whole place.

Other than working in the kitchen, is there another aspect of running a restaurant you've come to enjoy as a result of taking on all these different roles

No, I was born in the kitchen and that is my ideal place. I've found things I like less. Paperwork is one of them. Honestly, I'm not very good at going around talking to guests. My passion's still just making good plates of food and seeing people smile. That's why I got into this business before and why I stuck with it.

With your location here in Midcity, do you find that Rue is more of a neighborhood place?

It's absolutely a neighborhood place. It's starting to get a little attention here and there, nothing really big, we kind of just keep to ourselves. We're not looking to take over the world, not looking to be Commander's Palace. They are this institution  I'm just trying to find my little niche, my neighborhood folks, just trying to knock it out, just trying to keep the place running. With this place, you don't have that large a following, and you definitely don't have the people saying, "I'm coming to town and I'm eating at Rue." But, with 30 seats, you don't need a huge following to fill it up. We sometimes wish it were a little bigger to accommodate the demand now. It's small so before we started getting really busy we could have 15 people in the dining room and it would look full. In the beginning, I had a bunch of people pop in and say, "I live right around the corner, I saw you guys opened." I'd say 80% of my customers during the first two months would have been within a ten block radius. I've gotten my fair share of business from Wit's [Inn] too, but it was all neighborhood people because a lot of people here walk or they don't have cars  it's just the Midcity aspect. They ride bikes, they walk, they're out and about.

You spent some time in New York...

I was in the CIA for 2 years in upstate new york. I'd go into town a lot  into New York City  because it was like a 2 hour train ride. You'd go in, you'd go to wherever, you'd watch a couple kitchens, you'd go back up. I never had a full time job when I was up there because when you're in CIA you're in school 8 hours a day, 5 days a week. It's a full time job, so there's really no time for a full time job but I did my fair share of going into town and eating and trying to observe some kitchens so I could see the different ways people run their restaurants.

How did you see the differences start to emerge between diners here and diners in New York? Do you find that people here are a little more forgiving or that they expect different things?

People here are a little more forgiving. New York people are ruthless, that's just the way they are. I mean, they want good food and they've got plenty of it and if you don't have good food you're not going make it. In New York it's always what's opening tomorrow, because I'm going go there one time and never show up again. Here, people come to the same place. There's a loyalty aspect to it. I've got this one couple  they came in I'd say probably the second or third month we opened, they wanted a table, we moved some stuff around, got them at a table they liked, and they've been back. I checked the reservation book the other day and I think they've made 22 reservations here. Every other week, like clockwork, at 6:30 they take their table. People here are very loyal to where they like [to eat]. I think that's really advantageous to a lot of restaurants here because it keeps them going longer. And people here go out to eat all the time. There's no other place where people go out to eat so often. Dining out doesn't kill the bank and you're not spending $300 a meal. You can go get a good meal for 2 under 80 bucks and have a great time. Up there [in New York], it's always about what's next, about what new, edgy technique, new ingredient, new...I think here they're more focused on what's a good time, atmosphere, and you know the table next to you or do you know somebody here, that's more what this town's about.

So how do you tell your wait staff to foster that kind of friendly atmosphere?

We don't have a huge amount of front-of-house training. I find it makes for service that's too robotic. Really, we have our fundamental things that we'll teach our waiters, just the things you should and shouldn't do, and then we send them out there and say, hey, look, just make friends with all your tables. I want a waiter that's going to come in and have a conversation with that table about whatever it is they want to have a conversation about and be comfortable with it. I don't want the waiter to be shy about it or want the table to feel uncomfortable because they're talking to them. If the table doesn't want talk, that's fine, but, as a waiter here, your job is to make friends with all the tables and then give them good food and a good experience. So it fosters that neighborhood thing  get really good food in and have just very relaxed service, not uppity, not too tight.

Has your vision for this place changed as you've been in business?

The vision was always the same, we're just still kind of working towards it. In the beginning, we did it with such a small staff. It was me, one cook, and a bartender. I had five employees. Now I have 17. We have grown way faster than I thought. I did not expect that the first year out I'd triple my workforce, but we opened with such a small staff we were very limited as to what we could do and the amount of people we could use. Now that we're starting to get staff and get some talented people in the kitchen, we're going to strive for more refined, more complex food. The urge with fine dining is that you always want go nicer, but we also know that there's a threshold in this area, that no one's paying $40 a plate.

Do you have days or hours where you're randomly busier for no apparent reason? Like Wednesday at 5:15 or something?

No, we're pretty packed every night. For that 6.30 to 8.30 seating, barring horrible weather or something like Easter weekend when we're slower because everybody's out of town. The week after Easter's usually not the busiest, but we'll at least fill up once tonight. That busy time is just every night, and every night is pretty full. Friday to Saturday is just constantly busy. There's never really a dull, slow day. We just opened for Monday, so that's the slow day because we're just getting the word out.

What about the lunch rush?

Pretty steady. We were never really, you know, we're not a quick lunch place. It's going to be about an hour to eat lunch here. We're kind of catering to that clientele, so some days are busier than others, some days are just normally busy, and some days are slammed. You just never know.

Have any crazy, new small-business owner tales to tell?

[Laughs] Me and the energy company don't get along very well  that's a joke, but we've had a ton of problems, this whole block has. I think in the first six months I lost power during service four separate times. If you look up right there, see where that box is, that actually holds the wiring system that powers my building. Well, it sparked, lit the building on fire at like 5.30 when we were opening and that cord was around the outside seating area, spewing sparks everywhere. We had people coming in and there were some kids out here riding bikes and I thought they were throwing fireworks. At first I was like, "Are you guys serious?" Then I looked and this thing's coming down and I'm like, alright alright  there's a burn mark from the power cable. They had Homeland Security out here, the fire marshal and all this stuff  it was an event, and I was a little stressed about it.

You guys make great cocktails  would you consider this a cocktail or wine place?

It's actually 50-50. Some days I'm a wine base and some days I'm a cocktail base. We've got a great bartender here, doing some interesting things, some different stuff. We have a pretty good cocktail list and cocktail program going.

What are some city restaurants you like, out of your competitive radius of course?

Places I like to eat...I need a day off to go eat somewhere first. There are plenty of awesome places in town right now. I always like Herbsaint, just because it's good, bistro food. Daisy opened on Magazine, they're doing some really cool, simple bistro food. Other than that, when I get off work I just want a burger, something simple. I don't get to go out as much as I used to, unfortunately, but I wish I could. For the time being, I'm okay with being busy all the time.