Ralph Brennan on Heritage Grill and a Year of Expansion

Share All sharing options for: Ralph Brennan on Heritage Grill and a Year of Expansion 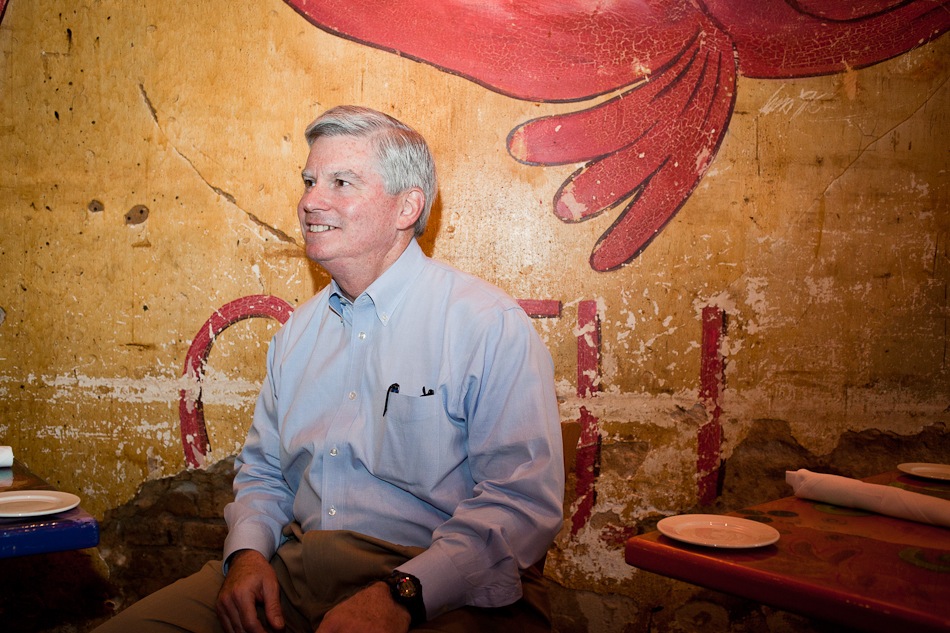 The last year has been a busy one for Ralph Brennan, head of the restaurant group that includes Red Fish Grill on Bourbon Street and Ralph's on the Park on City Park Avenue. Over the last twelve months, he has opened Heritage Grill and Café B in Metairie, in addition to formalizing an agreement with the New Orleans Museum of Art to run the museum's restaurant, called Café NOMA. (And going back just a few months before that, Brennan's popular Italian restaurant Bacco closed in January of last year.)

Heritage Grill, celebrating its one year anniversary this month, is both a lunch spot and the headquarters of Brennan's off-site catering operation, with both the restaurant and the catering currently led by chef Steven Marsella. Eater recently sat down with Ralph Brennan at Red Fish Grill to use the one year anniversary of Heritage Grill as an opportunity to talk about this last year of expansion and his plans for the future.

So Heritage Grill opened around this time last year.

Yes, it's been open just a little bit over a year. It opened just after Mardi Gras last year. We took possession of the property on the Friday of Mardi Gras weekend. We had two weeks to convert it. So at the time we didn't do a whole lot to it, we just kind of cleaned it up and opened. Then over the last year we've continually upgraded the design and the decor to get it closer to what we would like.

When did you start talking about this project?

Seriously, just about a month before. The story behind this restaurant is that we made a decision to start an offsite catering company. And actually, I was in a meeting and I was talking about a catering company. And I made the comment that I wanted to find a restaurant, one that was closed, so we didn't need to start from scratch. I wanted the kitchens, I wanted the refrigerations, et cetera, to get us started so that hopefully that way it wasn't a big, up front capital investment. A friend of mine was in that meeting and he works for the man that owns the building that Heritage Grill is in.

Yes, Heritage Plaza. Frank Stewart's the owner's name. And at a break, John [my friend] came to me and said, "How'd you like the restaurant downstairs?" We happened to be at Heritage Plaza for the meeting. And I joked and laughed with him, and he said, "No, seriously. They'll be moving out in several months, or two months, or whatever. And they'll go sooner if we want them." So I looked at it, snuck in one day and had lunch. Then we toured it one day when the restaurant was closed, looked at it and said this would be a great operation for us. So it's primarily a lunch restaurant. Then dinner's all private parties, and we're starting to see some business there.

So dinner is all private events?

Right now it's all private parties. Because of where it's located, I think it sets up better for that.

That makes sense, I guess. The location is, maybe not odd, but it's definitely in a different spot than, say, your restaurants in the city.

Well, the catering is what's driving it. When the restaurant first opened years ago as Charley G's?they've had several restaurants in there, but Charley G's was a very successful restaurant. Charley G's was a lot like one of our restaurants here in the Quarter, Mr B's. And I think they did pretty well, but then for other reasons they closed. Then it became two or three other restaurants, and now we have it. We've redecorated it over the course of the year, but for me it has a bistro feel to it but with a more contemporary, 2012 feel to it than, say, when Mr B's opened thirty years ago.

So that was the vision for it, then? To give it sort of a modern bistro feel?

Yeah, bistro, casual. Our goal is to make it the place to go for lunch in Jefferson Parish. We've opened two restaurants in Jefferson Parish over the last year, Café B and Heritage Grill. So we have a large presence, I think, in Jefferson Parish, and I really want this one to be the place for lunch. Especially with the business community and the political community. It's interesting, though. We get a lot of ladies in there, for ladies' groups. We had a party yesterday of about a dozen ladies. They liked the look of it.

It just kind of happened. We closed Bacco at the beginning of 2011 and I was looking for a location for Bacco, My primary concentration was uptown, the Magazine Street corridor somewhere. Probably farther down, closer to Audubon Park. But that's where I was looking. I knew the location for Café B, I had been there before when it was New City Grille. When I first started looking for Bacco it was available because New City Grille closed. But someone came in right away and took over. Fortunately for us, they didn't work out more than four months, so I called the landlord who was a customer of ours, I know him, and I said, "We'd like to talk to you."

It was a conscious decision to leave downtown and the French Quarter area, and again I was really targeting uptown, but that part of Metairie is very nice. And what I've discovered in both locations is that a lot of our customers downtown live out there. So a lot of people we see at lunch now we see at dinner at Café B. And at lunch what I find, is that Heritage Grill has become a meeting place. It's kind of between Orleans and Jefferson, downtown New Orleans and the business community in Jefferson Parish. One of the things that's very important in New Orleans is parking, and there's plenty of parking outside.

Your history is pretty well documented, coming from a family of restaurateurs and even working in high school as a prep cook at the original Brennan's Restaurant. When you're opening these new restaurants how active are you in the creation of the menu?

I work with the chefs and our executive chef Haley Bitterman. We all work together on it and we talk a lot about what we want it to look like. This restaurant, because it's lunch and it's in the office building, I would say it's more of a lunch menu than some of the other restaurants. The lunch menus in some of the other restaurants are driven by the dinner menu in a lot of ways, because dinner is the primary meal period. But here lunch is the only meal period. So you'll see more salads, more sandwiches on the menu. But then we have a piece of grilled fish, we have a hanger steak on the menu. We also have a package that's very value-oriented with a choice of several entrees. And also we make a time commitment, because I remember back to my days 35 years ago maybe when I was in public accounting. We had a limited amount of time for lunch because we had to bill 8 hours a day, so the longer you're away from your desk, the later you have to stay. So what I tried to do there was set up a quick lunch so that people in the building could come down.

Big picture, with the openings over the last year is there anything you're especially proud of?

What am I proud of? I think, actually, that we've done a good job. I really attribute it to the staff that we have, the teams that we have at each restaurant. Plus we formalized an agreement with the New Orleans Museum of Art and re-concepted the restaurant there into something simple, straightforward: Café NOMA. Again, another restaurant that's primarily lunch-driven. And that's worked quite well, too, and we have a great team in there both in the kitchen and in the front of the house. This business is about people. I could talk all day about food, but it's about the people that execute that food and the people that serve that food, and they're all part of the team. They're what make it successful.

You said before that you've been slowly redesigning the inside of Heritage Grill. How close are you to actually having it look the way you want it to look?

I'd say we're 98% there. There are a few little design elements that we need, a little bit more on the walls. But as far as the physical plant is concerned, everything is done. The latest thing we did is we closed in the kitchen. There were two big openings but it's not a good looking kitchen so we closed it in. And as I said, just a few knick-knacks on the wall and pictures. I enjoy buying those things. What I've learned over the years is that when you build a restaurant, you spend an awful lot of time and an awful lot of money on things that the customer never sees. Your air conditioning, your plumbing, your kitchen equipment, and a lot of those things. Then all of a sudden at the end the design comes in, so it's always a lot of fun at the end when you actually see the restaurant take shape as things go up on the walls, the chairs get there, tables, everything.

Moving forward, have any plans for the next year?

The plan is to concentrate on what we did [this past year]. I have looked at a couple of other projects, but there is no project right now that we're pursuing.

Well I'm looking for a new Bacco location. And I live up by Tulane University, so I still haven't given up on Magazine Street. Regularly I drive that, looking around. So hopefully a spot will turn over and open up.

Anything else to add?

Well, last year was a lot of fun. It is a lot of opening and planning and designing new restaurants. I think I did bite off a little more than I should have. [Laughs] But you know, personally I'm having a blast. I think everyone in the company's having a blast. We are stretched a little thin right now. We've made some decisions to do some staffing up, so we're in the process of hiring and looking for some good people right now. Looking at some potential candidates from the inside. But, knock on wood, we've been very lucky. The restaurant's have been well received, so that's good. But we'll see. If another good deal comes along, we'll jump on it.