Share All sharing options for: Xtofer Starnes on Grabbing Food at Three Muses

Welcome to The Gatekeepers, a regular feature wherein Eater talks to the men and women who stand between you and those coveted tables. This month: Xtofer Starnes from Three Muses. 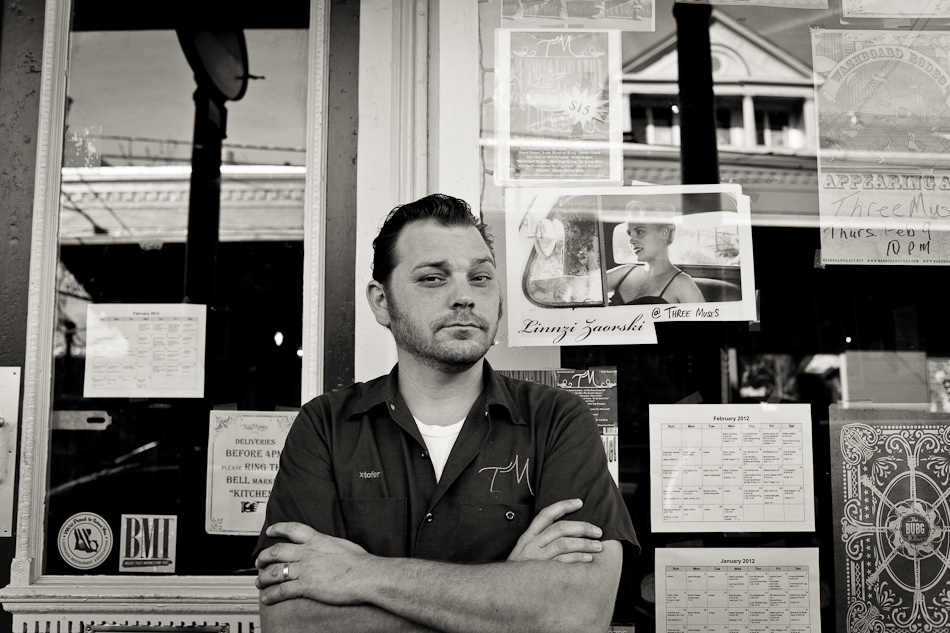 Three Muses was opened in August of 2010 by the trio of chef Daniel Esses, musician Sophie Lee and GM Xtofer Starnes. (Starnes says that that is his "industry name," while in actual conversation he goes by Chris.) Of all of the restaurants and music clubs to open in post-Katrina New Orleans, Three Muses is arguably the most New Orleanian of all, combining the city's food, music and cocktail cultures into one collective whole. Located on Frenchmen Street in the heart of the city's local music scene, it's not just a restaurant with great music, or a music club with great food, or a cocktail bar with great food and music. It's all of those at the same time, cementing its place in both the city's dining and music scenes. We recently chatted with Xtofer about getting a table and hanging out at this Frenchmen Street hotspot.

It's 8PM on a Saturday night. What kind of a wait am I looking at if I want to get a seat at an actual table?

Well, because of the way we do things, it's a little bit different. I usually tell people to just relax, have a drink. We have a lot of staff that runs around, so if we see people waiting for tables we try to keep an eye out for where people are getting dessert or where a check gets dropped. 8 o'clock on a Saturday night, it's usually like crunch time, it's our busiest time. So I'd say maybe you'd still only have to wait about 20, 25 minutes maybe. Time to get a drink or two.

What's the best time to come in if I want to sit right away?

If you want to come in and get a table immediately and start eating, the kitchen opens at 5 every day and we don't have a happy hour on Sundays and Mondays. So if you came in at 5 on Sunday or Monday you have a pretty good chance of walking in, immediately sitting down and being able to order food and start that.

How many seat are in the restaurant?

Have you ever gotten any crazy requests from people?

I had a lady the other day look at me and say, "Where can I get real food?" And I wasn't really sure what she meant by that. I think she meant more of a like a big entree type place with a big piece of meat on it and a baked potato. So I sent her down the road for a steak. But, I mean, strangest things? I think in this day and age it's pretty much that everyone's convinced that it's a good tactic to be aware of things that you don't hardly know what they are [on a menu]. So we get asked for a lot of stuff, you know this without that, or that without this. And most of the time, the food has been prepped, so it's already put together mostly. The chef's just got to put some finishing touches. But really, we don't get any really crazy stuff.

Do you all ever get any celebrities coming in?

Oh, we've had a few in that honestly, probably because of my age, I didn't know who they were. These girls come in who are maybe in their 20s, and people are like, "Oh, that's so-and-so!" and I'm like, who's that. "Oh, from that movie!" And then I'm just like, "Oh, I've never seen that." But we've had a few for sure. We have local celebrities who come in all the time, but as far the Hollywood types, I'd say we've had anywhere from 6 to a dozen [since we've been open].

What do you do when it's packed and a "VIP" type comes in and wants to be seated immediately?

We get those calls, where people will claim to be with this company or with that company. And we just tell them what we tell everybody, this is how it works. We're not going to do anything where we make it as difficult as possible for ourselves. But the only VIPs that come in who we actually do reserve tables for is my wife. Or Dan's wife. That's about it.

What's your favorite seat in the house?

If I was going to come in to eat, I'd want to sit at table 11, which is far removed from everything and everyone. And that's typically where my wife likes to sit. We have to get her out of the traffic.

The steak and cake [a grilled hanger steak with a crab cake]. Hands down. But I mean, chef's food, he really hits it out of the park with the menu.

When you're not at Three Muses, where are you eating?

In my kitchen. I just made two big things of shepherd's pie. My wife can't cook, so on my nights off I just make enough food to get us through the weekend.

What about drinks? Are you just drinking at home, too, or do you like to go out?

After shifts, me and the crew that's working will go out and we mostly stay in the neighborhood. We'll go over to Spotted Cat or any of those places, see whatever band is playing. Or if we're feeling a little more adventurous we'll wander into the French Quarter, to like Molly's at the Market. We stay on lower Decatur, we don't get into the whole French Quarter scene.