Share All sharing options for: Meet the King Cake at La Dolce Nola

Throughout Carnival, Eater NOLA is holding our own version of a King Cake Party, where we go around town getting to know some of the city's more interesting Mardi Gras treats and the people who bake them. 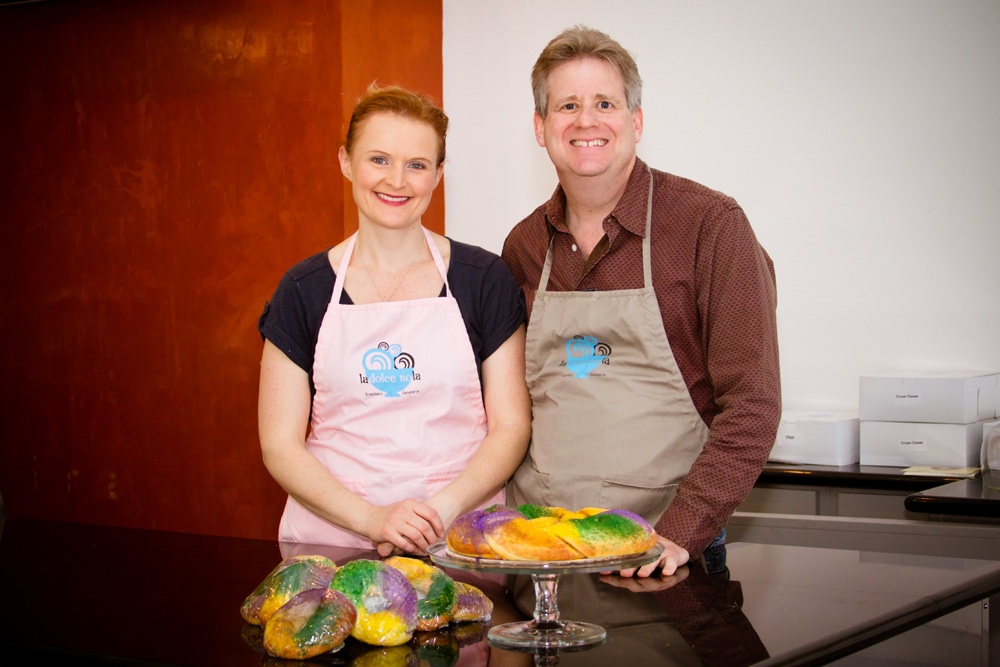 This week, we talk to Will and Jennifer Samuels, owners of La Dolce Nola in Old Metairie. (The couple also owns Pizza Nola nearby in Lakeview.) La Dolce Nola is primarily a gelateria, so the baking operation there is relatively small, especially when compared with the big-name, old-line bakeries. Despite that, they still pump out a pretty big selection of king cake varieties, including two relatively novel offerings: a nutella king cake and a mini, personal sized king cake. Here's everything you need to know about La Dolce Nola?at least on the bakery side?and their king cakes.

Do they ship? Yes, $5 for delivery in Metro New Orleans or $35 for shipping across the (continental) US.

How many made? Jennifer Samuels says it varies. "I sell all my orders and then make a couple extra. On a slow day I may do 20," though that number grows on the weekends, especially as Mardi Gras draws near.

Background on the bakery: Will and Jennifer used to own French Quarter Pizzeria but sold that business a few years ago. In 2010, they began planning to open La Dolce Nola, though the space for Pizza Nola became available and they decided to open both within a few months of each other. Jennifer says, "The idea came out when I was pregnant with Lydia," their now-three year old daughter. "I started working and making things at home and then started getting pretty good at it. When the space came available, it seemed like a good idea."

Development of the king cake recipe: As Will notes, "Jennifer makes all the items in the shop," and the recipe more or less came from her at-home experiments. She adds, "I made my own for a while because I wasn't a fan of many sweet doughs" that other bakeries sell. "So I worked and worked and worked and made what, 40 or 50 of them in the shop before we started selling." And what about the nutella recipe? "I had the idea for the nutella [during last Carnival] but it was too late in the year to try to sell it."

Vision for the king cakes: Will starts off by saying what they don't want to be: "We're not trying to be Haydel's or Randazzo's." Jennifer adds that "We can't do 1,000 in a day, but we're trying to have fun."

The technical difference between La Dolce Nola's and other bakeries' king cakes: Basically, it's the dough, Jennifer says. "It's more of an old brioche. I wasn't around for the original McKenzie's [a long-gone bakery whose king cake legacy lives on at Tastee Donuts], but a lot of our regulars who have gotten it say that it's closest to that." Other than that, the big difference is "just good ingredients."

Have a favorite king cake you want to know more about? Leave it in the comments or email.