Share All sharing options for: Gatekeepers with La Crêpe Nanou's Rich Siegel and Katy Castaño, and Little Man Too

La Crêpe Nanou sits just off a busy stretch of Prytania Street, just a running start and a superhuman leap away from the Prytania Theatre, which, if it's playing a strip of culinary celluloid (Julia & Julia, for example), can deposit a hungry audience of Boeuf Bourguignon enthusiasts on Nanou's doorstep, where they'll be greeted (if we could all be so lucky) by a plump orange tabby. "We've had some fairly clueless hosts over the years," says Rich Siegel, the proprietor of Nanou, "so, in moments of frustration, I've said, 'Let's just make the cat the host!'" Siegel and girlfriend Katy Castaño have cultivated a close-knit staff to help keep Nanou intimate and friendly, just the sort of place you might settle down for an after-movie meal, or, starting the week before the Super Bowl, a pre-footbal brunch.

What are your busiest hours/days of the week?

Rich Siegel: Weekends, always. In fact, there's this perception that you can't get in here, that people are lined up out the door. It's just not so. You can get in pretty quick on weekday, as well as on Fridays and Saturdays. It's probably the same everywhere. 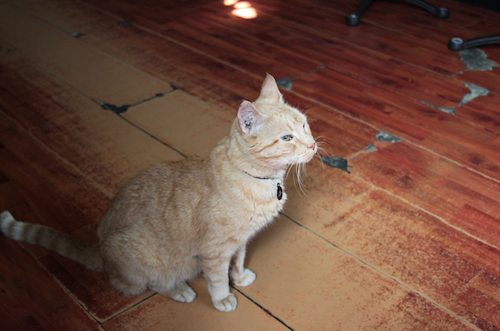 Are there any fluky busy hours? Like, at 2:00 pm every Thursday it's mobbed?

Katy Castaño: Yeah, I think that's definitely the peak time. We're only open during the evenings except for Friday lunches. So, Friday lunch, it's really just noon to 1:00, 1:30. You can also just hang out...

RS: Even on weekends, if people come in at 8:30, you'd be surprised how easy it is to get in. I think most people want to do the 7-8 dinner hour, so there's a huge crush of people, and guests have this idea that it's always packed.

Do you get a large turnout from the Prytania down the street? Are people coming in before shows and then rushing through their meals?

KC: Oh definitely when there are film festivals going on, because they're in right at six. That's when we'll get the line.

RS: Yeah, the Julia & Julia movie was showing at the Prytania a while back, and we had all of sudden this run on Boeuf Bourguignon and I'm like, "What's going on?" Sure enough, the movie was responsible.

What are some of the differences, front-of-house-wise, between lunch and dinner service?

KC: I would say definitely that dinner is more casual because for lunch we get more business people on their break. But, that's why we wanted to open it up and let people know that they come in at 2:30, hang out and have their bottle of champagne.

As people are fond of doing in New Orleans....

KC: I've been kind of surprised that on Fridays there are people who are definitely here in some large parties, no doubt. But there are definitely kind of those speed eaters that have a very small window to squeeze lunch through. 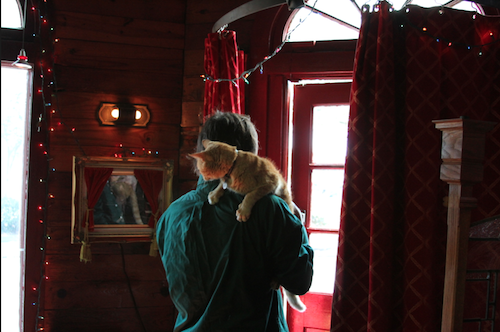 What qualities are you looking for in house staff, either behind the bar or table to table?

RS: Competence [laughs]. The thing is, we opened in 1993, and my mom and Nanou were partners, still are, and they kind of hired their friends, so it was a real casual place in the beginning. Most of the people who worked here were artists and musicians, stuff like that, really cool people, and that seems to carry on today. You know, I play music, and, through the years, a lot of my musician friends have worked here. Now, I'm the old guy and there are a bunch of kids working here, a new generation of artists and musicians, and that's great. It's nice that they have other interests outside of here and that they happen to be a great group of people who know each other outside of this place.

Autonomy is a big thing, too?there's no micromanagement, and [the servers] do tend to manage each other and take ownership, which is great. You can see that, as an outsider, see that these people just know what they're doing. I've heard people describe them as doing this dance when it gets really busy, because you've got to get through these tiny places and they do it pretty seamlessly.

We just had our Christmas party, and it's really cool to see how they all interact with each other. Even if they had never met before working here, now they're all best friends.

KC: Yeah, people like that just seem to flock to this place. I mean, that was me. I wasn't living here, but I visited here and I kept asking people, "What's that little French place?" I'd always drive by, and whenever I drove by, I didn't realize that they weren't open for lunch. I stumbled in here?this was the first place I came when I moved here, just because I loved the environment, and I could just tell...

RS: You fit right in. 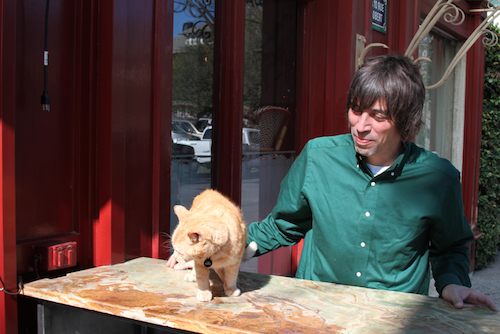 What are some of your most reliable gatekeeper tools that help you keep the front of house running smoothly?

RS: The first person is the host or hostess at the door, and if there is a wait list, they've got that.

RS: We don't use computers for that sort of thing.

KC: Spreadsheets are nonexistent, but I'm kind of working on that right now.

Is there a certain rhythm you get in with the front of house duties, where you know intuitively that you can turn X number of tables over in a given night?

RS: There's just a way of doing it?if someone orders a cup of soup and then they have a steak well done, you know that you've got to pick that up immediately so the guest isn't waiting forever. I think knowing that rhythm comes from just doing it and knowing how quickly the kitchen can put stuff out. I don't know that you can even teach that?it's just trial and error.

KC: Yeah, Benjamin, who's been here the longest of any of the servers, has got it down pat, but it still doesn't necessarily work out perfectly.

RS: I think it's all really a matter of reading the party, you know, you have some people who are regulars and you know what they're having, and you know that they want it now and they want to get out. Then you can see that people are on a date and they want to linger over courses. You kind of play each table the way they want it to be. If you need a table desperately, you can always count on the fact that some people are going to move quickly through their meals.

KC: We don't lord over our tables. The servers have large sections, and they're multitasking constantly.

RS: One of the nicest compliments I've heard is someone saying that she didn't even notice her waiter?it was just hands that came in and cleared everything. The wait staff is informative. We have a small wine list, but each wine has a reason for being included, and there are nice stories about the grower or the vineyard, and usually it's not well-known among most people, so there are good stories that you can tell. Of course, it isn't like TGIFridays in terms of flair.

KC: No song and dance.

RS: No song and dance, but, really, there's neat stuff that people ask. It's pretty informal yet smart service. 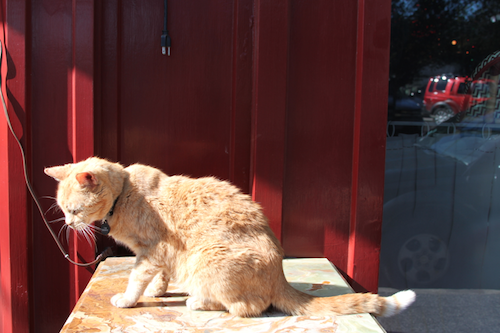 Any war stories from the restaurant business that stick out in your mind? Unruly guests? Incompetent waitstaff?

RS: I've been know to turn into Basil Fawlty. We have a mascot orange tabby cat that comes to work every night and he sits out on the host's desk, and we've had our share of clueless hosts, so I said once, you know, let's just make the the cat the host. As far as obnoxious customers, those are the ones you want to move quickly [laughs].

KC: We want to make sure that no one walks out of here upset, so if you can appease someone by buying them a dessert, or a drink or anything like that, then you do it. Because of course, if you burn one customer, you burn five more.

RS: It's so rare, but you can tell that there are just these people every once in a while who are looking for a fight, and it's so much easier to just let them win, to not belabor the point and just to let them have whatever they want because, otherwise, it's just going to escalate. You have to try and kill them with kindness.

What are some your own pet peeves about front of house service when you go out to eat somewhere else?

RS: When, as soon as you sit down, someone's already hovering over you, asking, "Are you ready to order?" I think forcing the pace is sort of obnoxious. When waiters ask, "Are you still working on it?" I go crazy. I hate that. Even some of our people have dropped that one, and we talk about it in meetings. It just has a really unappealing sound to it.

KC: Well, of course, there are the clueless waiters who are just rushing because they have no sense of time and other peoples' space, but then there are the ones that want to turn the table over, or just assume that you're done with your food. That's the most embarrassing thing ever, when you have to put your hand down on your plate and tell your waiter, "I'm not done." 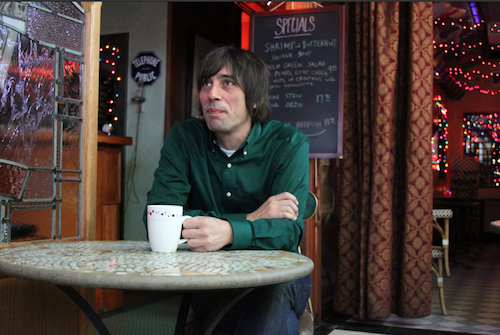 Do you have anything special planned for the holidays that people should know about?

KC: We have New Year's Eve, which is the only time of the year we take reservations. We've got a great band for the second season.

RS: Yeah, we have Pierre Pichon, who plays at Bacchanal a lot with the Gypsy Jazz stuff.

KC: And then Sunday brunch is coming. We're going to start it up the weekend before the Super Bowl. We figure, since the game falls right in between the two weekends of Mardi Gras, it'll be a good time to introduce brunch. We don't have TVs in here, which means that it's not the place to watch a game on Sunday, and we're not on a major street, which means we're very much a neighborhood restaurant.