Share All sharing options for: Anthony Bourdain Slams Blackened Out on Gawker

Among divulging that he's currently reading the galley for a Richard Hell autobiography, Anthony Bourdain managed to throw some serious shade at Blackened Out today during a Gawker Live Chat, where he answered people's random questions. You may recall the now epic Treme Rant that Rene Louapre IV shared with the world last week, which basically, in a very hilarious way, said, that Treme's "story of New Orleans' culinary reemergence after Katrina is about New York, not about anything that happened down here." Well, Bourdain apparently read it, and thinks the piece is "xenophobic" and "weird." Oh no he didn't. Check out the question regarding Blackened Out and Bourdain's answer below: 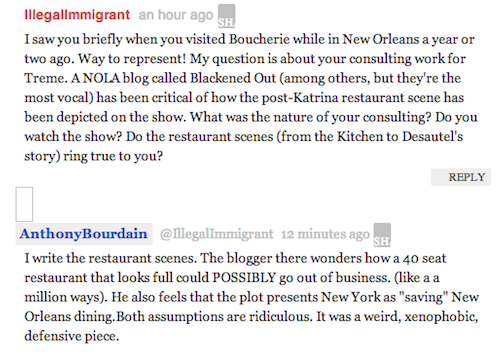 Bourdain went on to answer another question about Treme during the Gawker Live chat too, doting on his "hot shot chefs":