One Year In with Midway's Ben Sherman and Steve Watson

Share All sharing options for: One Year In with Midway's Ben Sherman and Steve Watson

A Chicago deep dish pizza joint on Freret? Two guys from D.C. making Chicago deep dish pizza in New Orleans? Cats and dogs, living together? This is the new order of Freret Street, which, in just over a year, has become something of a casual dining mecca in a city already bursting at the seams with creative cuisine. The High Hat Cafe, Ancora, Company Burger, and Dat Dog are some of the young Freret eateries assembling small cults of devoted diners, but perhaps Midway Pizza, the brainchild of Kingpin owners Ben Sherman and Steve Watson, is burrowing deepest into the Uptown neighborhood, turning itself into the sort of friendly, around-the-corner pizza joint that parents can take their kids to, so that one day those kids can grow up, move far away, and tell tales about the legendary pizza place in their hometown... For now, though, Sherman and Watson are just happy to be part of the Freret food renaissance and to be serving up pizza they grew up loving.

How's business at one year in?

Ben Sherman: It's good. You know you come out of the gates and everyone's very curious. The thing for us is, it's good that everyone's curious, but we hope that they come back. We have a good neighborhood relationship. We're just excited to see all the return business, you know, every pizza place needs its regulars?we have our Tuesday night guys, our Wednesday night guys...

Steve Watson: The other thing is, we got a lot of press because of Freret Street. We started out really hot and felt like we could make people come back if we could get them in because we're really confident in our product. And it's one of these things where we have a different kind of product than a lot of other pizza places. We do things a little differently, and initially, we didn't know how that would go over, but it seems like, with the repeat customers, it's really starting to turn into the sort of place we thought it could be.

Why do a deep dish pizza place here, and why do it now?

SW: We both had the idea of doing a bar because we had this place, the Kingpin, and we've had a really great run with that. Originally, we were just going to try to do another bar, and then we sort of had different ideas. Our parents have a pizza place in D.C. where we're both from, and then it was like, "Why don't we do the same sort of pizza place here because they don't have anything like that?" No disrespect to the pizza we eat in New Orleans, but it was just something different. We knew it was good, we knew really liked it, and figured we could pull it off. Making it work down here, though, was different than doing it up north because there are so many variables?the environment, the water, the dough, to name a few.

BS: We knew how to do it, too. You know, aside from the variables?water, temperature, all that stuff. We both knew how good it was because we both love it.

Jeff Talbot at Ancora has talked a lot about how difficult the humidity can be with making dough. Do you guys run into some of the same difficulties with the climate?

SW: At Ancora it's a little bit more refined than what we have. We were so busy doing all this other stuff trying to get this place ready that we finally got to this point where we were like, "We have to start making this pizza."

SW: Both of us had worked in kitchens, and we were lucky to have friends to help guide us with recipes and salads. But we almost didn't have enough time...

SW: The test kitchen wasn't ready, and it was like, we were going so fast setting up that if we were ever going to have a nervous breakdown, it was going to happen then, and we kept asking ourselves, "Can we make it work?" We went through about two weeks of different stuff, checking temperatures on the oven, and what we found with our product was, as opposed to Jeff's, we were able to figure out that our dough only needed about three hours to get ready. The dough up north is a little thicker, but here it's a little thinner. Eventually, we were able to control how the dough rises, but our method is not as intricate as [Ancora's], either.

BS: It's a more controlled environment, too.

Where are you getting most of your business from? Neighborhood people? University students?

BS: We've had people come in from Metairie because there's not a whole lot of deep dish pizza around. So people will come in and say, "I drove all the way in from so and so." I'd say the majority are from less than a mile away, which makes us really happy. A lot of young families come in sort of earlier in the day, maybe for lunch. And then we'll have couples on dates sit at bar, maybe some guys there too watching the game. The university presence is not overwhelming, but mainly we get neighborhood people. Uptown folks in general.

SW: We've had a lot of good press, knock on wood. When we first opened up, we'd get people from Chicago who were really serious about their pizza, and we're like, dude, you've gotta take it easy. We put on the Bears one day, and some Chicagoans came in and were like, "We're gonna stick it to you," and I was wearing a Saints shirt and I was like, "Calm down." But we've had a bunch of people who've come in from Chicago, and our take on the pizza is a little different from the strict Chicago style. Some places in Chicago put the sauce on top, but we don't do that. We're not using cornmeal either. For different reasons, people either from here or from somewhere else are starting to take our pizza on its own merits, and it's starting to become like a New Orleans deep dish. It's different from Chicago, but it's similar and people like that little bit of nuance.

The thing that we value here, and I think that Jeff [Baron] from Pizzicare would attest to this, is that you really can't get away with shitty ingredients in this city. You absolutely need fresh ingredients and we really harped on that. Everything that we can do fresh, we do. We try to put the best ingredients in everything. We're not just spreading sauce over pizza dough and saying, "Come on in!" With deep dish especially, there's a little more to it.

BS: We also play the Bee-Gees on the jukebox... 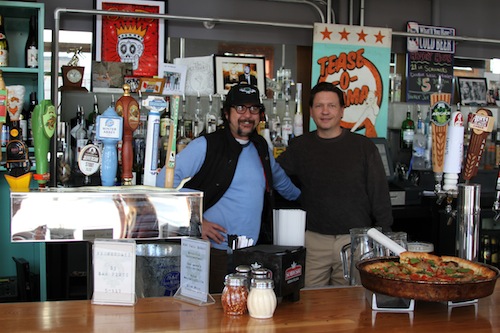 Is it a balancing act to adjust your original vision to the way this place has actually turned out?

BS: When we first opened, people would come in and wait 25 minutes for a pizza, which was unheard of. It's nice that now, less and less people are asking, "Why is this taking so long?" People are starting to understand the style. They understand that it's a different type of pizza. It's becoming less and less of a foreign thing.

During the first year, there seem to be so many different challenges. What really sticks out in your mind as something that you had to overcome?

SW: The first month we were open, neither of us was sleeping, and I'm like, "What the fuck are we thinking? We could be golfing right now." The challenges for us are just dealing with a bigger place [than the Kingpin], a different animal, more people, more things that can go wrong. We just worked really hard, and what you're worried about is that you want every person to have this certain experience, and you have to sort of, after a while, trust what you have.

We're lucky to have been pretty busy right off the bat. If you're busy and you're rolling, there are less mistakes to be made. There were times, though, when we were first opening when I wondered why I was doing this all over again. I did this when I was fourteen, fifteen, sixteen, and it was déjà vu, you know? But that's a good thing.

BS: I think it's easier too, you know, a year and two or three months into it?we've got great guys in the kitchen and we sleep a lot better at night. It's steadier, you know what to expect, a lot of the troubleshooting is done, and the pressures that were going to blow have already blown.

BS: Yeah, new equipment is such a luxury?you plug it in and it works, all the time.

Do you find working so hard builds momentum? What is it that keeps you at this

BS: Sometimes you look around and you're actually enjoying it. It's what you make of it. If you don't want to put in an effort, it's probably gonna be really slow and you're gonna be miserable. We're proud of what we've accomplished here already, and we're really excited about the street. We look around at a lot of the people we work with, and they're happy and we're happy. People come in here and they love the place, and that makes you feel good.

SW: Yeah, the positive stuff, and then, like you say, it just makes you feel good when people come in. And you realize that you create this environment and you hope it parlays into these people getting what you're trying to do and then it takes on a life of its own. When you see the place full and people having a good time, that keeps you going. Knowing that you're doing something really good makes you sleep well at night. The busier you are, the more excited you are, and you just keep going. We want to do another one, and there's the same risk with that, but when you believe in what you do and you know that you can put something together that you're really proud of, it makes it worth your while. 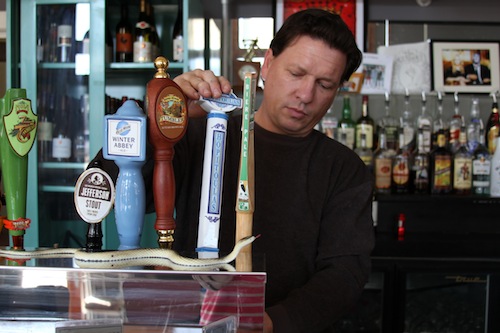 What's it like to be part of the new Freret Street?

BS: Nothing but joy. It's an honor to be part of it. I think the happiest thing I feel is when someone comes from around the corner, comes in and has a pizza, has never had deep dish pizza, and you're being accepted by the neighborhood. It's the most important thing. It's a big thing for people to come two or three blocks, or from right around the corner, and tell you they're happy you're here. It's an exciting thing.

SW: We're lucky to be part of it. People really want this area to work.