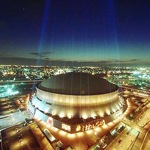 Here's an idea: instead of playing the Super Bowl in a "grim and inhospitable Rust Belt stadium," the owners of the Giants and Patriots should just fly their teams to New Orleans and play a winner-takes-all game of their own. Shouldn't be too hard to do (they would just need someone to let them sneak into the Dome), and the teams and fans would probably (definitely) eat better. No offense, Indy, but Cochon Butcher is an upgrade over Subway. [The Gurgling Cod]