Get to Know the King Cake at Sucre

Share All sharing options for: Get to Know the King Cake at Sucre

The king cake is the traditional Gulf Coast Carnival pastry, a ring-shaped cake laced with cinnamon, covered in icing and purple, green and gold sugar, with a plastic baby hidden inside. And the king cake party is a thing, usually in workplaces or similar associations, where a different person?typically whoever found the baby in the previous king cake?brings a king cake every week. Every Friday from today through Mardi Gras, Eater NOLA is having our own version of a king cake party, where we're going around town profiling the city's leading king cake bakeries. 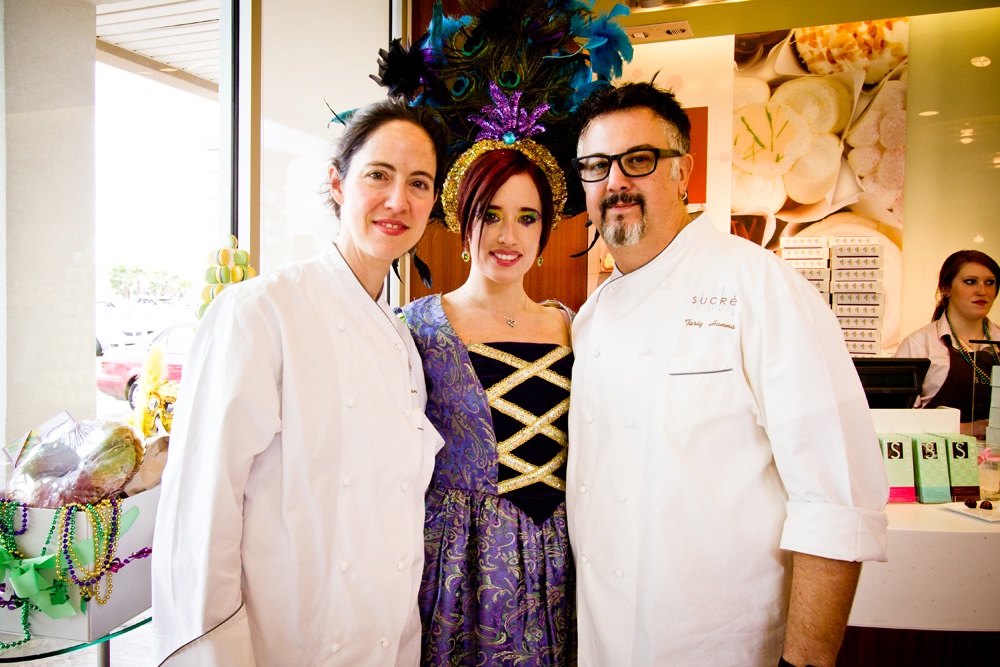 New Orleanians are fiercely loyal to their favorite king cakes, especially from generations-old places like Haydel's, Randazzo's and Gambino's. (Some of these old-line places will appear in this series.) But in the last several years, many new bakeries have gotten into the game, creating their own styles of king cakes while paying tribute to this deep New Orleans tradition. One such bakery is Sucre, led by Tariq Hanna, a pastry chef raised in England who spent most of his career in Detroit.

Under the direction of Hanna and business partner Joel Dondis, Sucre's has become one of the most popular king cakes in town. Selling out of boutiques on Magazine Street and Lakeside Mall, their king cake is slightly smaller than many and much less sweet than most. To get a sense of what goes into the Sucre king cake, we visited the bakery during the actual king cake party they hosted for the Times-Pic's tasting. After the jump, everything you need to know about the Sucre king cake.

How many sold: About 2,000 per week, with about 500 of those getting shipped across the country. (Both numbers go up in the weeks before Mardi Gras, of course.)

Tariq on the recipe development: "I tried a bunch of king cakes. I could give you the politically correct answer and say all of them were great, but they weren't. The whole mass market fabrication element that had taken over, it was more about commercialization. Everyone, I think, had lost sight of the integrity of the product.But going back to the historical aspect of what the king cake was, you come to understand that, okay, it's a brioche ring, laced with some cinnamon. Then I started looking at all these different things that I had done and figured out what I liked."

Tariq on the technical differences between Sucre's king cake and others': "Most king cakes that are produced in town, it's simply a sweet dough, it's a slightly enriched dough. But we use a danish. It's a brioche base, laminated with more butter so it has a higher fat content, making it much richer and giving it that unique texture."

Joel Dondis on the difficulty of coming out with a new king cake in New Orleans: "If you put it out there, it's like hanging out your laundry. Because you will get compared to the others."

Tariq on the difference between the old line bakeries and Sucre: "For us, [the king cake] is just one additional item. Interestingly enough, one of the girls that works with us used to work at Haydel's. And she's said that basically, the whole year they're really not that busy and that everything is focused on this time of year. This is like make it or break it for them. And they basically have 30 people round-the-clock working on king cake. I have 3."

Tariq on why Sucre only makes one flavor: "The real reason why is that we can realistically only handle so much. If you're gonna make one thing, make it really good. Don't spread yourself too thin."

Tariq on the initial reaction to their king cake: "I think the guard was up. Like, 'First of all, you're a foreigner, I don't think you fully understand what you're going to get yourself into with this thing.' I guess for me it was more of, if I'm expected to be part of the culture here, then the culture has to accept who I am. So by putting our twist and our identity on that, it was very simply that I wasn't going to make it unless I was going to make it the absolutely best I can."

Tariq on New Orleans' king cake culture: "It's like bloody cornbread or fried chicken, where everybody's mother makes the best one or this place makes the best one. It was amazing how divided and opinionated everybody was [when we started out]."

Tariq on criticism: "I don't care. I'm not trying to sell 10,000. I'm not trying to be fucking Haydel's or Gambino's or Randazzo's. I just want to be me. And if I'm gonna do something, it's going to be done as I feel it should be done. But as long as I can put out a good product that I can stand behind, let the critics say what they will and I'm fine with it."

Have a favorite king cake you want to know more about? Leave it in the comments or email.