Share All sharing options for: Mondo GM Jenni Lynch Talks About Life in Lakeview and Working with Susan Spicer

Welcome to The Gatekeepers, a regular feature wherein Eater talks to the men and women who stand between you and those coveted tables. This month: Jenni Lynch from Mondo. 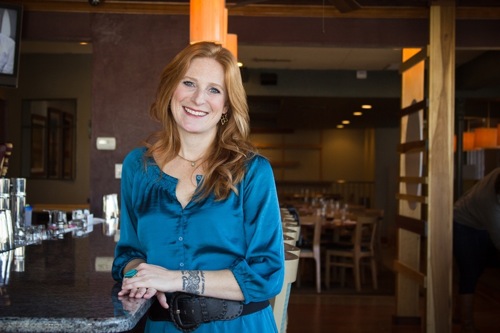 In June of 2010, chef Susan Spicer branched out into the Lakeview neighborhood to open Mondo. With chef de cuisine Cindy Crosbie leading the charge, Mondo offers a much more eclectic menu than Spicer's acclaimed French Quarter restaurant, Bayona. Given its comfortable vibe and neighborhood setting, Mondo may never get the attention or accolades of Bayona, but it's become a go-to spot for neighborhood people as well as a rare reason to actually go to Lakeview for non-neighborhood people. General Manager Jenni Lynch, a veteran of Bayona in addition to other fine dining establishments, has been there since the beginning, and Eater recently sat down with her to talk about getting a table at Mondo, working with Susan Spicer and her favorite bartender in the city.

It's 8PM on a Saturday. I don't have a reservation. What kind of wait am I looking at?

We don't take reservations except for large groups, so you're in there with everyone else. It can be anywhere from half an hour to an hour, but all of our tables here, and our bar tables, are first-come-first-served, and the seats at the bar serve the full menu so that's a good option. We train the bar staff to know all the food so that you can still get the full dining experience when you sit out here.

Generally, earlier is better. If you get here right at 5:30, that's when we open, so that's good. We serve a snack menu in between lunch and dinner so that's a good time to come in, too. But sometimes, you know, it's a neighborhood restaurant so we do have regular clientele who are eating between 5:30 and 6:30 and we can fill up pretty quickly. I actually encourage people to call before coming in to see what the wait is. Sometimes 7 o'clock is the best time because that first turn is over and you can get in and out pretty quickly.

Do you people ever try to pull any tricks to get seated more quickly?

We don't have many tricks up our sleeves. We do have a lot of dining that's really flexible, so we can make things happen very quickly.

How many seats are there in the restaurant?

About 130 including the bar.

And what's your favorite seat in the restaurant?

I like table 5, which is kind of way back in the corner on the platform. It's a round table but you can see out into the dining room and you're still nestled away. Sometimes it can get a little loud in here but that's a little quieter area. I also love sitting at the bar.

This is obviously a neighborhood-y restaurant, so what are your regulars like?

I wasn't sure what Lakeview was going to be like when we came in here because it's still in so much of a transitional phase [after Katrina]. But we get everything?neighborhood people, our regulars who walk here. We have a good uptown crowd who are regulars, and people from the Bywater. Our regulars are really diverse, so we're happy to see that. Also, Lakeview's gotten way more youthful. So outside of even the families, there's a lot of young professionals who have moved in and bought homes. So it's very good, a very wide range.

Do you get many celebrities or that sort of people coming in?

Mainly local celebrities, that's our biggest base. We get a lot of musicians, from Henry Butler?David Freeman from WWOZ brings Henry Butler in a lot?Theresa Andersson, James Singleton, who lives in Bayou St. John. My favorite celebrity, right now, and they're friends of the restaurant and of Susan, is Steve and Michelle Gleason.

I thought you were going to say Steve Gleason.

Yeah. [Laughs.] His in-laws, Paul and Jill Varisco, Paul went to high school with Susan and so he helped us get our kitchen up and running. So yeah, they've always been family and now, with everything going on [with Gleason's recent diagnosis with ALS] everyone just gets so excited when they come in.

What brought you to Mondo? You were at Bayona before, correct?

I was. I took a short hiatus in the Philadelphia area and then when I moved back I went and I helped out my friends at Gautreau's. And Susan called me and said, "I think it's time for Lakeview, what do you think?" And nobody says no to Susan Spicer.

What's the relationship like with her? Is she here very often?

She's really involved primarily with me on a day-to-day basis, and then probably in the kitchen a couple nights a week. But we have a really fantastic kitchen staff. Cindy Crosbie is our chef de cuisine, she's been here since the beginning. She's amazing. And we have two fantastic sous chefs. So she really has let them take the reins.

How is working here different than working with her in the Quarter?

Well, my background is fine dining, so when we had the opportunity to do something neighborhood and casual, I was excited about it. Because our lives have changed a lot since we met at Bayona almost ten years ago. You know, we have families, and this is really more reflective of our current life and that day-to-day lifestyle. I'm going down to Bayona this afternoon for a wine lunch, I love that elegance, the service. But this is more reflective of our lives now, you know? We'll have a table that has a family with kids coming from a soccer game. And then another is date night. Another one is going to have four courses and they're more entertaining. Each station is pretty diverse and that's exciting.

I love the pâté. It's so indulgent. But I'm really excited?we're extending our lunch hours and we have a sous chef that just came back from a 5 month culinary tour of South India, Thailand and Laos. And he's primarily our lunch sous chef, so we're about to see a lot of what he learned on that tour and it's really exciting.

When you're not here, where do you like to eat?

With my kids?I have two kids?we're on the West Bank a lot, at Pho Tau Bay. When I go out, I'm so in love with Freret Street right now. It's very reflective of Harrison Avenue and of neighborhoods that are really trying to come back. And so right now I'm really trying to support anything there. And I love Adolfo Garcia. I think he's really just been a quiet force in New Orleans for a very long time. And from Rio Mar, La Boca to High Hat and Ancora, I think it's always really good.

I love Bar Tonique. And Pal's. I think Trent [McGill, bartender at Pal's] is hands-down the best bartender in town. When it's nuts, and he's working that bar by himself, he's still doing hot drinks and hot toddies and he's back and forth. He's great. It's a great neighborhood bar.