Jeffrey Carreras on the Year Since Opening Tracey's

Share All sharing options for: Jeffrey Carreras on the Year Since Opening Tracey's

Welcome to One Year In, a feature in which Eater sits down for a chat with the chefs and owners of restaurants celebrating their one year anniversary. 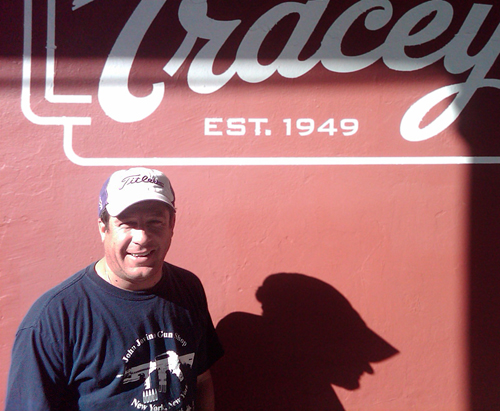 For twelve years, Jeffrey and Jamie Carreras operated Parasol's, a legendary Irish Channel institution most famous for its roast beef po' boy and its St Patrick's Day parties. Last summer, the building housing Parasol's was sold, and the Carreras moved around the corner to a larger space on Magazine Street. They opened a new bar and restaurant called Tracey's, after the original bar in that space, while the new owners of the other building reopened Parasol's. (For the Times-Pic's coverage of this, click here and here.) One year in, the Carreras have built a bar and restaurant that already feels like an institution itself and that is?wait for it?famous for its roast beef po' boys and its St Patrick's Day parties.

We sat down with Jeffrey Carreras to talk about the first year at Tracey's, coexisting with Parasol's one block away, and becoming a destination for sporting events.

Obviously Tracey's isn't your first rodeo. Why'd you and Jamie get into the bar business in the first place?

Well, I got used to it. I got out of the Navy, then worked at the Half Moon for like 7 or 8 years, managed that in the 90s. Then Parasol's came out to be for sale, business-wise, so I kinda jumped at the opportunity, put my foot in the door. I worked with them for a couple St Patrick's Days, during my Half Moon years, and I knew what kind of money was there to be made, what kind of clientele it had. Stuck my foot in the door and held it open.

Last year, when did you know you were going to have to move from Parasol's?

It was probably about mid-July, maybe end of June, early July. It was kind of third time was the charm, I guess. Jamie and I were trying to buy the building, and the first two times fell through and then the third time they jacked it up a ridiculous amount in terms of money. So they came in and said something about, "We have a buyer from Florida" or some such-and-such. We just thought it was a smoke screen to get us to pay up, pay that much money for it. Come to find out, it wasn't a smoke screen, and there just wasn't any way I was paying that kind of money for that building.

Even at the time it seemed really abrupt, like all of a sudden Parasol's had been sold and the old Parasol's people, you, were moving down the street. What was the transition like on the inside?

Yeah, I mean, we did a little second line and all that, we closed up the doors. We kinda knew it was coming; we were just going through the motions. And then, you know, we just set a date on opening up here. In between, I just kind of set my ducks up in a row, in case the move did have to happen.

Did you buy this building?

We did a 7 year lease, option to buy whenever we could afford it. So we're looking to do that in the first two years. We've got an upstairs apartment, room, balcony. It's nice.

So the transition from Parasol's to here was pretty clean then.

It's never a good feeling to have to do it, but yeah. It was three days turn around, really kind of odd. We took everybody, obviously, from the bar staff, the kitchen staff. And all the regulars came with me. They knew it was going on, didn't realize it was that big of a move. We just took all the memorabilia from Parasol's, all the equipment.

And what's it like coexisting with Parasol's still just down the street?

Yeah, you know, that's never going to change. That is an institution, hopefully he upholds that. And hopefully, you know, it goes well there.

One thing it seems like people are always wondering about Tracey's: Basically, what's up with the roast beef po' boy? Still here, still the same as it was?

Yeah it's still here. I mean, I've got the roast beef recipes [that we used at Parasol's], and the food recipes that went along with it. I don't change it if it's not broke.

And St. Patrick's Day? That's your best day of business.

Yeah, everybody likes to think that's our best day. And yeah, it's a great day for business, but people don't realize what goes into it. A lot of money, a lot of expense going into that. And if it rains, it pisses rain, then you're screwed. Happened to me before [at Parasol's]. But yeah, it's an excellent day of business, can't complain about that. But I just try to push it out every day. Make that business happen every day that we're here.

Aside from the regulars coming with you, this place gets packed, as anybody trying to watch a Saints game here can see.

Yeah, I mean, it's packed. I was hoping for it, you know, it was a blessing. I didn't think it would do that well, as well as it did. I'm a sports fanatic, I know a few of my regulars are, a couple friends, blah blah blah. So we just kind of set up a few TVs and I didn't really expect quite that turnout. It's been beautiful, it's crazy. You can't get in the house for LSU games, Saints games. I don't even like to be here, it's so busy. It's odd. But there's not a sports bar uptown, you know? The closest one is Cooter Brown's, but that's about it on that. That is the closest one to me, so it's kind of a blessing that we did it.

Aside from the focus on games, is there any other big difference between what you're doing here and what you were doing at Parasol's?

Quadruple the business. [Laughs.] It's what could be expected in a restaurant, I guess. It's always scary, that first year, just opening. That first couple days, it's like, "Man, does anybody even know we're here?" But it just boomed. And this building hasn't been anything in the last twenty years. A couple people that came in tried to do a couple things. Krantz's did a little restaurant, never happened. Alexander's did a steakhouse. And it was busy at times, but I guess they just didn't run the business right, drank their business away. Latin American club previously. It's been a long time coming, I guess, for something to happen here.

Moving forward, what do you hope to be able to do here?

I just hope to keep up the sports, and that Irish Channel tradition of just serving up good food, good drinks, and making people happy.