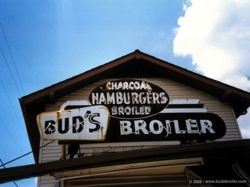 The results are in from the first round of NOLA Defender's Burger Brawl are in. As NoDef writes, "The results for Round 1 have been tallied, revealling a couple Cinderellas" (sic). Of particular note is the New Orleans Hamburger & Seafood Co.?which won its opening round bout against O'Henry's but now faces a tough battle against early favorite, Port of Call?and Bud's Broiler, whom our in-house bookies predicted to be the "bracket-bustin' Cinderella story."

Three of the four popular summer openings, Tru Burger, Juicy Lucy's, and the young hot shots at Company Burger all made it to the second round as well. The latter faces stiff competition in this week's round against the other co-favorite at 2-1 odds, Buffa's.

Again, all of these odds are totally made up but we're running with them. Get over to NOLA Defender and, as we like to say in Louisiana, vote early and vote often.