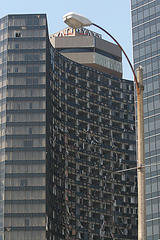 The downtown Hyatt Regency, that 31 story hotel attached to the Superdome that's been sitting there empty for almost 6 years, is reopening in October after a bazillion dollar face lift. And now we know what kinds of eateries and drinkeries are going to be involved. Spearheaded by Executive Chef Eric Damidot, formerly of Caesar's Palace in Vegas, here's what we're looking at:

· 8 Block Kitchen & Bar, doing breakfast and lunch with both high- and low-end New Orleans staples. Bar with small bites, meats and cheeses. Add this to the list of places to drink going to or from the Dome.
· Vitascope Hall, which seems to be a high-end sports bar.
· Starbucks, really?
· Lagniappe Exchange, a 24 hour market of sorts.
· Whole Hog Café, which seems to be exactly what it sounds like, a shrine to pork, whose sandwiches will appear at the market and the bars. Who ever said New Orleans isn't a good town for barbecue?

So that's that. Good to see that area on the up-and-up. [EaterWire]