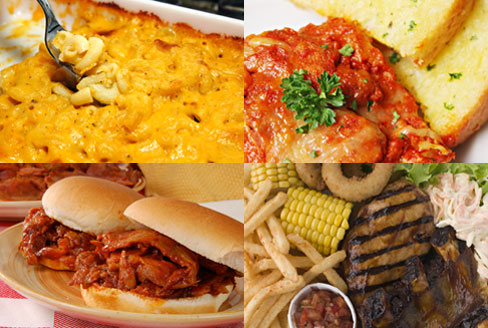 Mac 'n' Cheese, BBQ, Pulled Pork, and Chicken Parm photos via Shutterstock.
Every Man of the World* has a Heineken BeerTender®. After all, it lets you have the premium experience of pouring fresh Heineken draught beer right at home. It's probably the greatest gift in the world. Secretly, you'd love to buy one for yourself, but you can't. It's the holidays after all — buying yourself a gift looks selfish.


Until now. Introducing BeerFriender, a first of its kind Facebook application that matches you up with a like-minded stranger who's also in the market for a BeerTender®. Instead of buying BeerTenders for yourselves, the app makes it look like you bought them for each other. It’s going to change gift-giving as we know it.

Now that you are set with your BeerTender®, it’s obviously time to throw the perfect holiday party. Check out our list of New Orleans' best to-go friendly food spots to accompany your home poured draught.

1.) Cochon Butcher: This is the deli, takeout and casual eats brother to the Beard-nominated Cajun restaurant, Cochon. (And the chefs responsible for Cochon and Cochon Butcher, Donald Link and Stephen Stryjewski, are both Beard winners.) As the name implies (Cochon means "pig" in French) both specialize in pork and other meat products, with Cochon Butcher also offering to-go dips, salads, charcuterie, and the like.


2.) Martin's Wine Cellar: Martin's is primarily a wine and liquor store, but the Metairie location (714 Elmeer, 70005) has a bistro and deli with sandwiches, salads and specials, all available for order online.

3.) Gott Gourmet: Gott Gourmet started as the catering operation of Chicago-born chef David Gotter in January 2006, with Gotter opening the brick-and-mortar version in October 2008. The menu is eclectic, ranging from New Orleans favorites like po' boys and gumbo to burgers and hot dogs to salads and wraps, and is available for delivery, pick up, or in-house dining.

4.) Langenstein's: A family-owned grocery store that's become an institution, Langenstein's offers extensive catering and prepared foods options. The Better Cheddar Dip is out of this world.

5.) The Joint: For a less traditional holiday get-together, The Joint serves some of the city's best barbecue. It's not just pulled pork and brisket, though: the catering menu also features whole roasted chicken, salad, homestyle favorites like mac & cheese, and whole pies.

6.) Dorignac's: This is another well-established institution located in Metairie, with catering and holiday menus that are heavy on NewOrleans and Southern staples. But those menus are expansive enough that pretty much any craving can be satisfied.