A Conversation with Gary Wollerman of GW Fins

Share All sharing options for: A Conversation with Gary Wollerman of GW Fins

Welcome to The Gatekeepers, conversations with the fine ladies and gentlemen that stand between you and those hard-to-get tables. This week: Gary Wollerman of GW Fins. 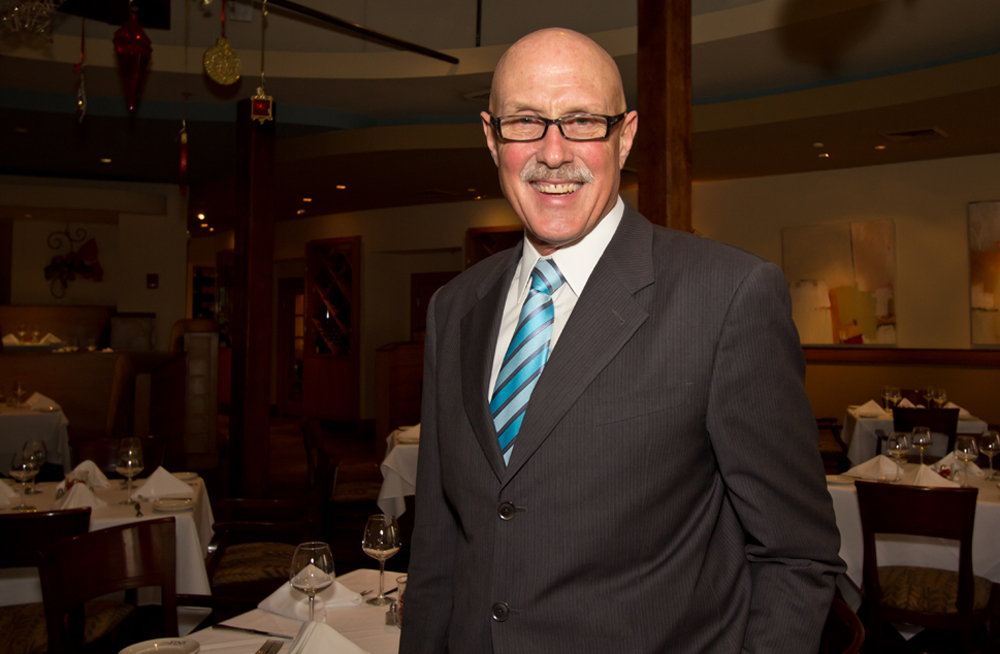 Gary Wollerman is more than just the General Manager at GW Fins, the celebrated seafood restaurant in the French Quarter. He's also the "GW" in GW Fins, opening the restaurant with chef and partner Tenney Flynn in 2001 after both men had spent years with Ruth's Chris Steakhouse. Located just off Bourbon Street, the service and the constantly changing menu of local and seasonal seafood has established the restaurant as one of the city's leading establishments. Eater recently sat down with Wollerman to talk about their regulars, their celebrity guests and where he likes to go on those rare nights off.

If I come in at 8PM on a Saturday with no reservations, what kind of wait am I looking at?

Well, 8PM, you're more than likely looking at a minimum of a 45 minute wait, if we're going to be able to get you seated at all. Because typically, given the opportunity, we'll book out the restaurant fully for reservations. So then that person walking in at 8 o'clock is hopeful that somebody else doesn't show up. Or a party size goes down and we can accommodate the group. That kind of thing. We do have three tables at the bar that are full-sized tables, full menu, full service. And then we've also got 12 stools at the bar itself that are also full menu. So when folks come in and we can't accommodate them right away in the dining room, we'll direct them to the bar, offer them that opportunity.

Typically, the book's gonna look like people's dining habits. Even in a town like New Orleans, 8's still prime time dining. And so, you know, if you come in typically before 6:15, then you're in great shape. Then after 6:15 it gets a little dicier. By 9, 9:15 it kind of loosens up again.

With GW FIns being just off Bourbon, do you get people who wander or stumble by and go, "Oh, look, a restaurant," and then try to just get seated immediately?

Oh, we do, we do get some of that. And we've really benefited actually by that pedestrian traffic from Bourbon Street. We print our menu daily, and as consequence we post our menu daily up in the window. So when the pedestrians are going by they can kind of check out the menu last night or what's on the menu this evening. It attracts a lot of people into the restaurant. I'd imagine that the foot traffic on Bourbon Street has got to be at a world-class level.

Do people ever try to slip you cash for tables?

Not me because I'm not running the books. My wife is, oftentimes, along with another lady. And I suspect that that goes on, but we work very hard to decline that opportunity. We just really try to be fair about getting people seated, and we're pretty fanatic about having your table ready at your reservation time. That kind of prevents us a little bit from being able to slip this person in or that person in, because ultimately it's going to be make us late for your reservation and we don't like doing that.

How many seats in the restaurant?

Total is 210 seats. So we're a pretty good-sized restaurant.

Do you have regulars, and what are they like?

You know, we really do. We have a high percentage of regulars and a high percentage of locals, when you consider our location at Bourbon and Bienville. And of course, if you get into a big citywide convention with 30,000 doctors in town then the percentage of locals in the restaurant's going to be pretty small. But the great thing about regulars is that they're regulars because they like what you do. And it's just wonderful serving people that you know upfront that they like what you do. It just brings out your best.

Do you get many celebrities coming in?

You know, we do get a lot of celebrities that come in. Over the years, we've had a great range of people. Mariah Carey's been in, Dennis Rodman's been in. John Madden's been in, Halle Berry's been in. So there's been a variety of people over the years. And you know, the cool thing, that I would think that they enjoy, is that they can come into New Orleans, they can come into the Quarter, and they don't get bothered. All of these people that have been in here, the guests don't come up and bother them. We're all kind of used to it, we're all pretty mellow, and so I would assume that they enjoy that kind of atmosphere.

The guy, as you can imagine, that created the biggest stir was Dustin Hoffman. We had to post a manager by his table to keep people from disturbing him.

What happens if the restaurant is packed and a VIP comes in?

I beg for their patience. [Laughs] The reality is that I'm way more interested in that regular, the person who comes in a couple times a month, a couple times a week, something like that. But the VIPs, or the celebrities, they're kind of depending on us to try to make room for them and we'll certainly do anything we can to accommodate them, but sometimes I've just got to ask for their patience. And most of them are great about it.

Have you gotten any really outrageous requests from customers?

Yeah, you know, I thought about that because I read some of your other interviews and I knew that question was coming. Not so much, I can't really remember any. Probably the biggest thing that we're challenged with is really just our dress policy and being as close to Bourbon Street as we are. Our dress policy is not very stringent, we just ask gentlemen to have on collared shirts, no t-shirts. But that's still a really large challenge, particularly in the summertime. But, funny requests from the guests? Not so much, I'm sorry.

What's your favorite table in the restaurant?

Oh, you're going to want to be in that table over there in the corner. I hate to give you the number.

I'd love for you to give me the number.

That's table 406. 406, or 401 [in the other corner]. As you can imagine, you're in the corner, you can see the street, see the room. Those are great tables. Then there's a booth in the raised area in the middle there, table 209. If you like booths, that's a great one because you're sitting up, you're looking over the whole dining room and you're looking out to the street and everything. So those are the three tables that are the most popular.

You're not just the GM here, obviously, you're also a co-owner. When did you open?

And what was the impetus for opening this restaurant and for you running the front of the house?

The Reader's Digest version is that I got fired and I needed a job. There you go. My partner and I?Tenney Flynn, who's the executive chef?we both worked at Ruth's Chris Steakhouse. He was the corporate chef and I was the chief operating officer. The company was going through a?it was being sold. The investors were selling. And so when we left, we got together and said, "Gee, what do we want to do?" And I think we both explored corporate jobs, and then decided that no, really, we wanted to stay here. So then we got together and decided that we wanted to open up GW Fins.

What's your favorite dish here? I know the menu changes daily but do you have any super-highlights that you love?

Well, the menu does change daily. And so much of that depends on seasonality. I love soft-shell crabs, and I love the job that we do on soft-shell crabs. But of course that's kind of a spring, summer, early-fall kind of dish. We do a great job with our smoked sizzling oysters. Again, that's kind of a fall to late spring thing, because in the summer the oysters aren't particularly good. Those are terrific dishes. When we can get blue fin tuna, we wood grill it and serve it with creamed leaks and portobello mushrooms, and it is just killer. So again, it depends on seasonality and availability of the fish, but we can do some great dishes when the seafood's available.

If you're not at GW Fins, where do you like to go out to eat?

First off, that's one or two nights a week, maybe. And of course one of those is going to be at home. So now you start doing the math and you're talking about two or three times a month! At the most. So we aren't really good customers for other restaurants because we just don't get out that often.

We like to eat out uptown, because we live uptown. That's a terrible thing for me to say because I've got a business down here in the Quarter. [Laughs] I'm always begging the uptowners to come down to the Quarter so that's kind of a funny thing to say. But we certainly?Bayona is a great restaurant, we really enjoy Bayona. And Susan [Spicer] is a wonderful, wonderful lady. We've had great meals there. And kind of our "special occasion" restaurant is still Ruth's Chris Steakhouse. And then, you know, we try to get around when we hear about new restaurants that have opened up.

Do you have any favorite new ones?

Yeah, you know, the one, I don't remember its name. Rue 127, was that the name of it? The food's great and it's such a pretty place. They've really maximized the beauty of the restaurant, the architectural detail of it and everything, they just did such a good job. So yeah, that's probably my favorite new one.

Oh, gosh, I'm a wine drinker. So that's pretty easy. And I must admit that my tastes are pretty limited, so I'm pretty much a California wine drinker.

And you know, the other restaurant we like a lot is Boucherie. Of all the bars, I think I like the one at Boucherie the best. Their bar is great, the bartenders do really good stuff with really interesting ingredients. The whole menu there is really great.