The Early Word on Root in the Warehouse District

Share All sharing options for: The Early Word on Root in the Warehouse District

Welcome to Good News/Bad News, a feature where Eater looks at the reaction, both good and bad, to recent openings. 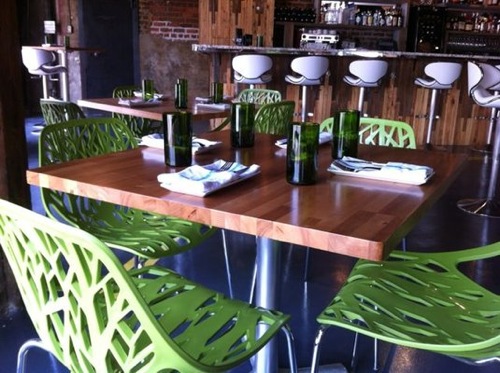 A pair of Restaurant August and Rambla alumni, GM Maximilian Ortiz and chef Phillip Lopez opened Root in mid-November in the old Feast space on Julia St. The describe their cuisine as "Modern American rooted in traditional flavors and techniques," and Lopez's menu is generally ambitious, featuring unique, often playful presentations. With the restaurant about to celebrate one month of business, it's time to see what people are saying about it. So let's look at the early reactions.

The Great News: The first legitimate Yelp review gave Root 5 stars, starting with an exclamatory "Dinga dong ding!" But thankfully, it gets more descriptive than that: "My fish was amazing and I sampled the scallops, and they were great too! They came in a cigar box because they are "smoked". How cute is that??"

The Fun News: Another Yelper reviewed Root after two visits, writing, "We've been there twice, and both times we had FUN at meal time." Also giving 5 stars, they write that the food is "amazing," the presentations are "unexpected" and the textures and flavors are "outlandish and whimsical." In other words, it's whacky, but in a good way.

The Soggy News: In the NewOrleans.com dining forum, one reviewer descibed the oysters as "conceptually adventuresome, but the foam and smoke, while whimsical, make the oysters soggy." But the reaction improved from there, with strong praise for the chicken and fish. "All in all," the reviewer writes, "a very good first foray, albeit with some minor tweaks still necessary."

The Generally Positive News: The very next reviewer in that same forum disagreed with that assessment of the oysters, though the dish still didn't get perfect marks: "they were very crunchy on top, and I thought delicious, although I had to wave away the smoke that was coming my way." After rattling off a number of other dishes sampled, giving a generally positive assessment of each, this reviewer noted that the service was "fairly attentive but with long waits from the kitchen."

The Baller News: Someone from the uptown cocktail bar Cure went, and enjoyed themselves so much they hit the caps lock on their Twitter app: "GO TO @ROOTNOLA, IT'S AWESOME! Congrats to Max & Philip. A great restaurant open until 2am Thurs, Fri, Sat....BALLER!"

The Cute But Contrived News: The folks at Urbanspoon generally approve, with the restaurant currently sporting a 94% approval rating and reviewers writing things like, "The dishes are playful not to mention flavorful and cooked the way the ought'a be!" But one reviewer didn't enjoy it nearly as much, giving his brief review the title "Cute but Contrived." Here's why: "Kitchen focuses on imaginative presentations but dishes lack great executions and are often just too much." And remember those scallops? "Scallops smoked with Cohiba cigars = scallops tasting like ashtray." Maybe it's a taste thing.

The Ambitious and Skilled News: In the biggest published review of Root thus far, Robert Peyton from My New Orleans praised Lopez's ambitions, and his ability to execute those ambitions. Peyton's experience at Rambla convinced him "that Lopez has the skill to match his imagination." And how'd he like those scallops? "The tobacco doesn't leave the scallops tasting like an ashtray; it registers in the background, significant but not overpowering." He praised a number of other dishes, including the aloo gobi (regularly praised elsewhere), the Korean Fried Chicken and the shrimp-stuffed deviled eggs, a Lopez specialty.