Cole Newton On One Year at Twelve Mile Limit

Share All sharing options for: Cole Newton On One Year at Twelve Mile Limit 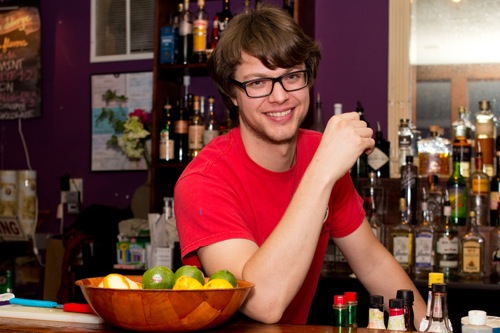 Late last fall, T Cole Newton, previously a bartender at the uptown bistro Coquette, opened Twelve Mile Limit in a quiet residential section of Mid City. Named after the drink, which is in turn named after the distance people had to travel out to sea to drink during Prohibition, Cole's vision for Twelve Mile Limit was simple: high quality cocktails, cupcakes and food, all in a low-key, neighborhood-y environment. The result has been affectionately described as a "sometimes sketchy, sometimes speakeasy feel," somehow combining the best aspects of a neighborhood dive and a high-end cocktail bar. Eater sat down with Cole to chat about opening his own bar and trying to straddle that line.

Why did you make the jump from being a bartender at Coquette to opening your own bar?

I'd seen Michael [Stoltzfus] and Lillian [Hubbard] do the same thing at Coquette. They were really good at what they did and gave it a shot, and it worked out. I lucked into some money and wanted to give it a shot myself. Plus I didn't want to be a bartender my whole life. There was lots of bartending when I first opened but obviously less and less as we've moved on.

Were they supportive of you branching out on your own?

Oh yeah. They were very supportive. As I said, they had done the same thing themselves.

What was your vision for Twelve Mile Limit?

The vision? It mostly involved big piles of money and me swimming in them. [Laughs] But actually, I wanted this bar to be all things to all people. If you like going to a dive, it's a dive. If you want a cocktail bar, it's a cocktail bar. If you want to play pool, we've got a pool table. Gambling, we've got gambling machines. I wanted it to work for the people in the neighborhood and I wanted to be accessible to anybody at a price point where nobody feels ripped off and where we can appeal to everybody.

That's a pretty tall order. Do you think you've been successful with that?

To the extent that it's possible, yeah. I think more than most places, we have.

How'd you find this location?

I found it on Google, of all things. I Googled "Bars for Sale" and this one came up. It's in a residential neighborhood, it's kind of hard to find, but it had three things going for it. One, it's a block from Finn McCool's, regularly called one of the most popular bars in the city. When people ask me where I am, I can just say, "A block from Finn's" and everyone's like, "Oh, ok cool." Makes it easier to find. Two, It already had a liquor license. And three, I could afford it. That's in ascending order of importance, obviously.

How did the opening go? Any surprises?

So was that just sort a soft opening?

Well, it wasn't really a "soft open." I had to open or I would've lost the liquor license, so I just kind of went for it. Then when the Times-Picayune covered us we blew up. Todd Price [the T-P drinks writer] came in and was like, "I like this" and wrote about us in Lagniappe [the T-P's weekly entertainment guide] or whatever. We were packed for like a month after that but it was still really half-assed. I didn't even have a staff yet. If I'd have known it was going to get that busy, I would've hired a staff. I had enough money saved to hire some people, but that sort of thing has to happen organically, I didn't want to just go and hire anybody. I was definitely pulling my pants down a little bit after Todd Price's piece came out, but it worked out.

Earlier this year you did a LivingSocial deal. What was your experience like dealing with that?

It's a mixed bag for restaurants. The kitchen here is run as a separate entity, and the deal was for some food and some drinks, so I was only liable for half. It's hard to keep up with for the food, I think. Like if I give away fifteen dollars of booze for $4.50, you know, people are probably going to stay and drink more and I'll make money. But for food, the profit margin is so small, I don't know if it was worth it. So I don't know if I would do it again. I think if I did, I'd just do drinks, because once people are in here and they're drinking, they'll probably order some food. But I don't know if I'd do it again.

There's a constantly changing menu item called "Name This Drink." How long is a drink usually up there before somebody actually names it?

Honestly, about half I've ended up naming myself. Half not. The shortest a drink has been up there before somebody named it was maybe a couple of weeks, the longest was a couple of months. Every now and then I just want to change my drink menu so I name it myself. Which is what I do anyway for all the other drinks, but doing it this way I'm able to crowdsource the naming a little bit.

What would you say are the false assumptions people have about this business? Plenty of people say "We should buy a bar" thinking it'd be a really fun time.

Well, it's dirty, tedious, time-consuming work, especially for the first couple of months. And really, it's tough being your own boss. The buck stops here. If something goes wrong, it's all on me, not anyone else. But there's a reason why people want to do it. It's glamorous. I know I'm doing something other people want to do. Honestly, if you want to open a bar, open a bar, but do it for someone else first. Do it on someone else's dime. Figure out how to run one before you own one.

You said earlier that you're still at only 60% of what you want Twelve Mile Limit to be. What are your goals for the next year to get that closer to 100%?

The main goal for the next year is to get all that done. Especially the backroom and the patio. I'd like to go non-smoking but I won't until we get the patio done. It's not that great kicking people outside onto the corner. I'd also like to get solar panels on the roof. That'd be badass. I don't know if the tax incentives will last long enough for me to do that, though. I'd like them to, obviously.