Welcome to One Year In, a feature where Eater sits down with the chefs and owners of restaurants celebrating their first anniversary. 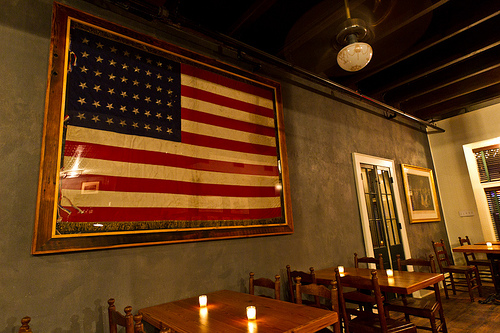 Last October, former publishing professional Sean McCusker partnered with LRG honcho Robert Leblanc to open Sylvain on Chartres Street. In the last year, McCusker and the team at Sylvain?including chef Alex Harrell and General Manager Murf Reeves?have quietly built a local following while also getting national attention in publications like the New York Times, CNN.com, and National Geographic Traveler. And just this week, Sylvain was named one of the 5 Best New Restaurants in the 2011 Times-Pic Dining Guide. All in all, seems like it was a good year. We recently chatted with McCusker about opening a restaurant in the historic Quarter and their plans for the future.

So when did you start talking about this project?

I would have to say, it was probably?god, even just talking about it was almost 3 years ago. I came down for a press trip, being a former writer, and on that trip I met Robert Leblanc and I approached him. I had always wanted to move down to New Orleans. He would fly up to New York, and I would fly down here, and eventually the plans just all started to, you know, come together.

What made you want to move down here?

I used to work for Rolling Stone, that was my first job in publishing in 1996, '97. They sent me down for a few projects. And like most people, after about 10 minutes I was like, "I'm moving here." And then in 2001 I was between jobs and came down for about 9 months.

What were you doing?

I was doing reviews for CitySearch, back when that was the place to go for restaurant writing. I was doing freelance writing for some places still in New York and then doing reviews and things down here.

And why leave publishing to open a restaurant?

When I moved to New York?I'm originally from Milwaukee?I got treated to some nice expense account dinners. And I got to travel a lot, to Paris and elsewhere, and it opened up a lot of the food world to me, having grown up in the meat-and-potatoes Midwest. And from that and, you know, being around food on the writing side, I just wanted to do it. The way I always put it is that I approached the restaurant the same way I would approach putting a magazine together. You want it to make sense cover-to-cover, the music, the menu, the dining room, the cocktails, everything.

And you were the one pushing for it to be in the Quarter?

We had checked out some sites on Frenchmen, we were thinking the Quarter or the Marigny. We thought it would work in the Quarter, thinking that there was a lack of food diversity in the Quarter, so we thought that this concept would work particularly well. We just didn't get a "wow factor" anywhere we went and then we came to this building, and even though it was a disaster and it had never been a restaurant, we just knew it was the place.

While you were renovating you must have had a ton of people checking in to see what was going on.

Absolutely, every day. People here, especially in the Quarter, aren't shy at all about introducing themselves and saying hi and seeing what you're doing. And this building it's one of the most historic buildings in the quarter. It was built in 1796 by [Andres] Almonaster, who did a lot of the historic buildings around Jackson Square, one of the godfathers of construction in the city. It's a huge building, a landmark, and there was a bakery there that had been there for years, La Marquise. And a lot of people would come by and say, "Oh my god, thank you, I used to come here as a kid," so there was a lot of nostalgia for La Marquise and interest in what we were going to do.

The original menu, of which there are still some items left, just came from what I used to eat a lot at the Spotted Pig and places like that in New York. These are places where the bar and the restaurant are together, with elevated comfort food in a bar setting, kinda loud, tightly knit quarters. A casual feel where you can still get a great meal.

And then the menu test for potential chefs was literally just me writing down a list of dishes I wanted to see and the chefs coming back with, "Hey, here's how I would make that." I equate it to giving them a coloring book to see how they filled it in. And Alex Harrell, our chef, he just nailed it. It was like we were sharing a brain.

And Alex was living in Charleston at the time but really wanted to come back, so his hiring was really just perfect for everybody. It really worked out. He's just a great chef, every day he just blows us away. He's so much better than we even originally thought. At this point it's pretty much his show. Even though we've gotten some accolades I think some people still don't know how good he is, because we don't have the white tablecloths, the French service, et cetera, that people tend to think comes with great food.

Well it was really kind of difficult. We had to work closely with the Vieux Carré Commission to make sure the renovation was up to their standards, the the historical standards. And the international building codes changed right before. And because the building had never been a restaurant before, there was a lot we had to do. So I went from being a writer, in publishing, to speaking fluent HVAC and that sort of thing.

When we were still waiting for everything to check out but we were otherwise ready to go, we were just so eager to open and there was still so much excitement about the opening. So we bought about 30 cases of Budweiser and some Jack Daniels and just hung out. And people would poke their heads in and we would offer them free Budweiser and shots of Jack, and it was like the best marketing thing we could do. It wasn't just us being funny, we wanted people to know what it was going to be, check out the menu and that sort of thing, so that they could see that, yeah, it was going to be high end stuff, but it's still going to be a casual place.

Now that you've hit the year mark, what are you most proud of?

The thing I'm most proud of is that the locals, especially in the quarter but also throughout city, have embraced us and that people actually thank us for opening up, for having something new. Because in the quarter, wherever you are, you can easily become a tourist trap. And we're far from that. We do get some tourists, but it's always people who have heard from word-of-mouth from other people who have been down. That people can be like, "Oh you have to go to Sylvain," that makes me feel really good. And we have very educated consumers, people who read food blogs and magazines.

But mostly, that we're a place were locals do come, that we're considered a local restaurant, that's what makes me the most proud. That people like Neil Bodenheimer from Cure or chef Adolfo Garcia come down to check us out, local people that I really look up to and respect, that's by far the thing I'm the most proud of.

Any big plans for the future or changes in the works?

Yeah, nothing big. We're going to keep our staples?we have regulars and we'll keep the things they love, the beef cheeks, the bolognese, that sort of thing?but we're going to let chef Alex run with his ideas and make it his menu, and also do more seasonal things. Each season we'll throw in 4 or 5 new things that will either stay on or come off, depending. But that way we'll just make it a little more seasonal and elevate the menu, and showcase Alex's talents. Make it just about him, and about what we do well.

You know, a year went by and we got by being the new kid, but we don't want to get stale, we want to keep it moving forward. And the cocktail program, we treat that the same way as the food. The things that Murf does here, he's always trying out new things, he makes his own cola and is always trying to push it forward. We're all pushing it forward, we're all OCD type characters trying to do this the best we can.

But we're also always looking around, seeing what other people in New York, Chicago, San Francisco are doing, in order to see what we can apply here. We had a lot of people saying when we opened, "Don't just bring a New York place to New Orleans," and that's not what we've done or what we're going to go in the next year, either. But we just want to keep pushing forward.

Where to Pick Up Pies in New Orleans This Thanksgiving