Welcome to The Gatekeepers, conversations with the fine ladies and gentlemen who stand between you and those hard-to-get tables. For our inaugural feature, we have Jenny Smith of Dominique's on Magazine. 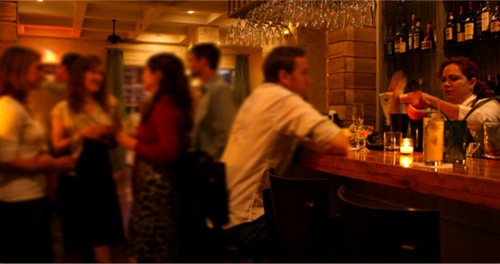 It’s 8pm on a Saturday. I don't have a reservation. What kind of wait am I looking at?

It depends. Usually Saturdays are our busiest nights of the week, so it's totally possible that we wouldn't be able to seat you until 9 o'clock or so. Also, we do have full service at the bar, which is amazing, and Kimberly is an amazing bartender. And we also have tables outside, which most people don't make reservations for. So that's a nice little treat, when you can show up and say, "Hey, the weather’s beautiful, why don’t you sit outside?" And people go, "Oooh, absolutely!"

It's absolutely a little easier. Of course, the average person, especially in this city, wants to eat between 7 and 8:30. And when they call and are like, "Hey, I have 12 people for 7:30 on a Saturday night, what do you think?" It's just, no. And of course, the challenge is that this restaurant is kind of small, so I only have so many tables.

I have 62 seats, not including 10 seats outside and 6 seats at the bar.

Do people every try to slip you cash to speed up the process?

Not really. I don't think that happens as much in the South as it does other places. The challenge here is that it's a locals' restaurant. Most people who come in are people who have been here 4 or 5 times before and they live in the neighborhood. And they're maybe the ones who try to get seated more quickly.

We definitely have some regulars, people who are just so passionate about our business, and they're just the biggest cheerleaders in the world. I can't be thankful enough for that. It's very exciting.

Do you ever get any celebrities coming through?

We've had a couple. We had Matthew McConaughey, and we've had Helen Mirren. Helen Mirren's been in a couple times, which is exciting. And then Matthew McConaughey came in for dinner and then sat at the bar and talked to Kim about mescals. She's kind of the quintessential mescal queen, so she gave him the history about that, the background of that. And he just loved it, thought it was amazing.

How do you handle VIPs who come in without a reservation?

Not really VIPs so much. I think most people who come in have been here enough, know that it's a small restaurant and that you need to make a reservation. Every now and then, I do get one of my regulars that'll call me at 6 o'clock on a Saturday and say, "Hey Jenny, I'm coming with 6 people at 8:30." I'm like, "That’s fine, I'll figure something out, just come on in." Just ‘cause, you’ve got to take care of your people, they always take care of you.

Who knows, with the party buses that go around, people get drunk and might want a really nice dinner?

So what's your favorite seat in the house?

Oh, that's hard. I think for an appetizer, it's definitely our sweetbreads with chimichurry. Absolutely, hands-down, the best sweetbreads I've ever had. They are absolutely amazing. And for an entrée, I'd go wth scallops over housemade pasta.

When you’re not here, where do you like to eat around town?

When I'm not here? Hmm. The thing is, right now we're closed Sundays and Mondays, so it's almost hard to find a restaurant that's open on Sundays and Mondays uptown. Although, Dante's Kitchen is one of my favorite restaurants. I love that place. They're very similar to us, in the respect that they use a lot of local produce, that kind of thing which I think is really amazing. And sustainability is very important to them, as it is here, and I just think that's really exciting.

I'm a low-key person when it comes to drinks. If I just want a cocktail and a great environment, I'll go to Bridge Lounge. Just because, you know, it’s kind of fun. Then again, if I do go out after work, I usually have one of Kim's cocktails first, because they're pretty amazing.

No Le Bon Temps, even though it’s just next door?

We do, actually at the end of the night that’s usually where the staff hangs out, which is kind of fun. We literally go into the bar, get a drink and then go sit outside. Just because then, we all hang out and relax and kind of bullshit about the night.