Share All sharing options for: More Info on the Soon-to-Reopen Hyatt Regency 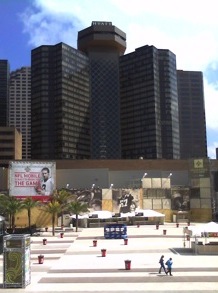 The Hyatt Regency is set to reopen in just over a week now, and this past Friday they held a big ol' training event for their new staff, which doubled as a sneak preview of the food and beverage offerings that will be a part of the newly-renovated, closed-since-Katrina hotel. The hotel, remember, will have a number of associated dining options, including 8 Block Kitchen & Bar, Vitascope Hall and the Whole Hog Café, all led by Chef Eric Damidot. (This is in addition to new Besh restaurant, Borgne, which will also be located in the Hyatt Regency.)

When Eater asked what brought him to New Orleans from Vegas, Damidot said, "Well, I'm French..." Which is a perfectly acceptable reason in and of itself. There was also some talk between Damidot and another French member of his culinary team?during the presentation to incoming staff?to the effect of, "We conquered this area several hundred years ago, and now we're back!"

But he also noted that he has a genuine respect for the culinary traditions in New Orleans:

The food here is absolutely amazing, as you can see from [all the vendors here]. And there's passion for it. The food here can absolutely rival a New York. That's what we hope to do.

Without any menus released yet, we can't say exactly how this respect will translate into the various restaurants' and bars' offerings, but at least there's this: Among the many vendors present offering samples to the new staff, local folks like Hollygrove Market and Farm and St James Cheese Co. were prominently featured. Everyone was also quick to note that Gulf Coast beers will be offered, including Tin Roof and Lazy Magnolia. That's a start.

The renovated Hyatt Regency viewed from the steps of the Superdome. [Photo: Eater NOLA]

New Orleans’s First Pickleball Venue Will Include Restaurant and Bar